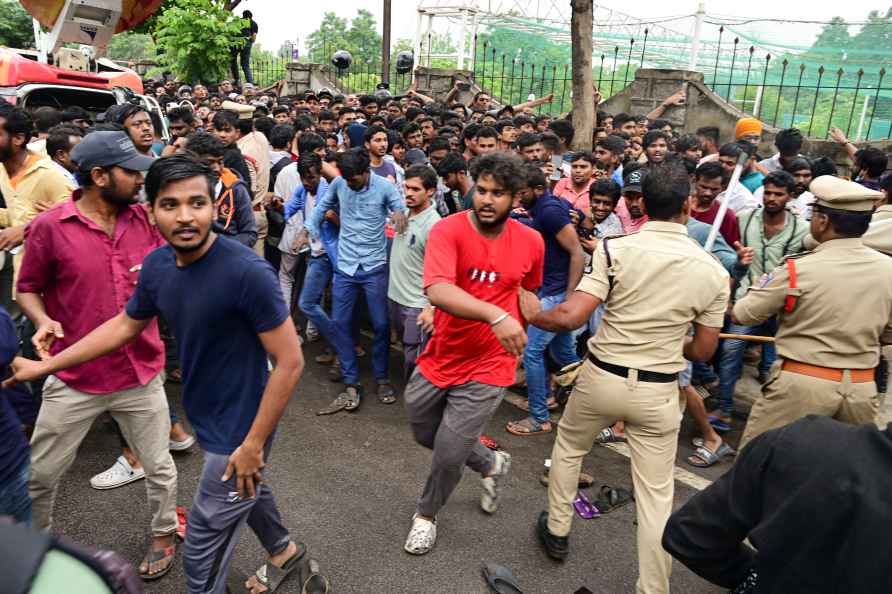 [Hyderabad: Police personnel try to disperse fans gathered to buy tickets for India vs Australia cricket match, following a stampede at Gymkhana Ground in Hyderabad, Thursday, Sept. 22, 2022. At least 4 people suffered injuries in the incident, according to officials. ( /PTI] Hyderabad, Sep 22 : At least 20 people fell unconscious and several people were injured after a pandemonium broke out at the Secunderabad Gymkhana Grounds on Thursday. Police had to resort to lathi charge as close to 30,000 people thronged to purchase tickets for the India-Australia cricket match slated for September 25. The Hyderabad Cricket Association had organised ticket sales at the Gymkhana Grounds for the match to be held at the Uppal stadium in the city. From early morning itself, people were seen standing in serpentine queues for the tickets. With people gathering in thousands, the police were finding it difficult to manage the crowds. Following a sudden rush of people from the main gate, the police resorted to lathi charge which resulted in several people getting hurt. Several persons, including women, caught in the crowd fell unconscious due to lack of air. Several police personnel were also hurt in the melee. Several women who were in the crowd were rushed to hospital after they fell unconscious. Police officials refuted reports that a woman had died in the incident. People on the spot said that the arrangements for sale of tickets were inadequate as only four counters were set up for the purpose. /IANS