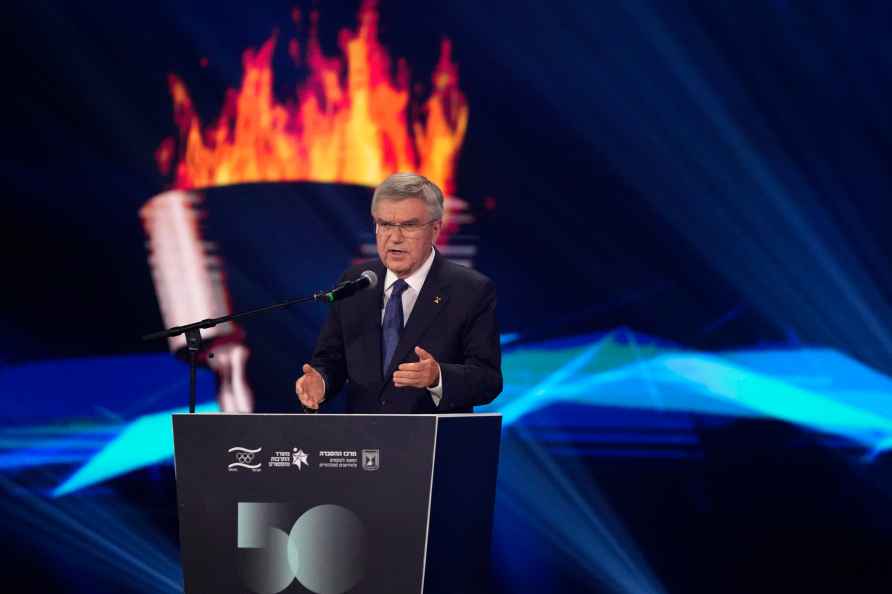 [Tel Aviv: International Olympic Committee President Thomas Bach addresses a ceremony on the 50th anniversary of the deadly attack on the Israeli Olympic team at the 1972 Summer Olympics in Munich by a Palestinian militant group, in Tel Aviv, Israel, Wednesday, Sept. 21, 2022. The head of the International Olympic Committee has apologized for the organization's longtime failure to commemorate 11 Israeli athletes killed by Palestinian militants at the 1972 Munich Olympics. Bach said the Palestinian attack in Munich was one of "the darkest days in Olympic history" and an assault on the Olympic Games and its values. /PTI] Tel Aviv, Sep 21 : Israel has threatened to launch a "diplomatic war" against Booking.com if the Dutch online travel reservation service company will add safety warnings to listings in the West Bank. Tourism Minister Yoel Razvozov wrote on Twitter that he had written to Booking.com and urged it to reverse its decision, which he denounced as "political", reports Xinhua news agency "The Israeli government would wage a diplomatic war against the decision," Razvozov told the Hebrew-language Ynet news site. He added that during a consultation with Prime Minister Yair Lapid on Tuesday, it was decided to establish work groups of Israeli diplomats that will work against the move. "Millions of tourists visit Israel, including this area (the West Bank)," he said. "At the end of the day, there is no problem." Booking.com, the Amsterdam-based firm which has over 28 million listing across the world, said in a statement on Monday that it planned to display "banners and notifications to customers related to relevant local safety considerations" for listings in the West Bank. The move came amid escalating violence between Israeli forces and Palestinians in the West Bank, including nightly raids to arrest suspects, which often trigger clashes. Over the past months, dozens of Palestinians were killed in these raids, which Israel says are part of a crackdown to halt a string of deadly Palestinian attacks in Israeli cities. In the June 1967 Middle East war, Israel occupied the West Bank, the Gaza Strip and East Jerusalem, which are claimed by the Palestinians, and has controlled them ever since. /IANS