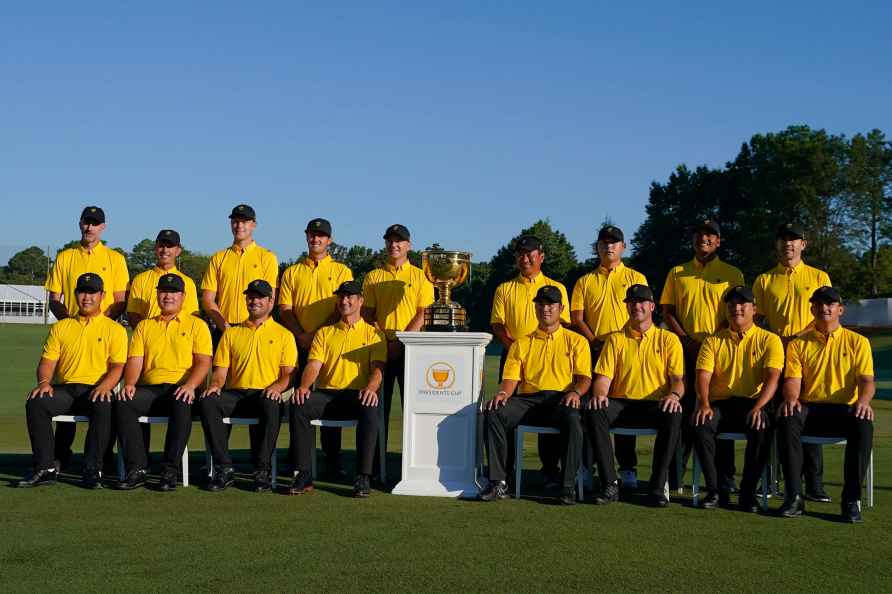 [The International team sits for a portrait before practice for the Presidents Cup golf tournament at the Quail Hollow Club, Wednesday, Sept. 21, 2022, in Charlotte, N.C. /PTI] Charlotte (North Carolina), Sep 21 : Veteran star Adam Scott has touted rookie Tom Kim as the International Team's "little secret weapon" as they look to upset the odds against a power-packed United States in the Presidents Cup which begins on Thursday. The 42-year-old Scott, who is making a record 10th appearance at Quail Hollow Club but has yet to be on a winning team, thinks the young Korean could be one of the stars this week. "I think young enthusiasm, and he's a confident young kid," Scott said about the 20-year-old, who is one of four record Koreans on the team. "Tom could be our little secret weapon. He's won on the PGA TOUR, and this is the next challenge in his career. He's obviously good enough to do it on the big stage. This is his first real opportunity. "I think it's fantastic as Tom doesn't have the English language barrier - and it's not picking on anyone else - and that's a real asset. I think a guy like him, he may not know it and no one has picked up on it, he's going to help bring our team together even more as he can really cross over between us and the other Koreans, although they speak some pretty good English. It really helps integrate our team." Kim shot to prominence following a stunning five-stroke victory at the Wyndham Championship in August where he opened the week with a quadruple bogey before racing to his first PGA TOUR title. With several other notable top-10s, the ever-smiling Kim earned automatic qualification into Captain Trevor Immelman's International Team to become the third youngest player to feature in the Presidents Cup after Ryo Ishikawa and Jordan Spieth previously. Colombia's Sebastian Munoz, one of eight rookies in Immelman's side, described Kim as being the bond for the 12-man International Team which comprises of players from seven different countries. "There's definitely different identities, cultures, likes, dislikes," said Munoz, who holds one PGA TOUR win. "I feel like it's always been kind of tough to integrate the Koreans with us, but I feel like having Tom on the team, he's super fluent and super funny so he really helps the whole team kind of mesh in that aspect. I feel like that's something we've benefitted and it's only going to help us accomplish our goals." Sungjae Im, who enjoyed a superb debut in 2019 at Royal Melbourne by delivering 3.5 points for the Internationals, played alongside Kim, Scott and Cam Davis during Tuesday's practice and believes his young teammate has been a tremendous addition to the team. "He's got a great sense of humour, brings a lot of positive energy and obviously he's the youngest player, so he's kind of the baby. Brings a lot of humour to keep the energy very light hearted," said Im, who finished tied second in the 2022 FedExCup final standings. Cam Davis, the second Aussie in the team, revealed Kim has been generating positive vibes in the team room. "He's been awesome. Really positive, really high energy, which I think is great. Obviously his first time as well to just come in here with an energy like this is the biggest moment of his life. It kind of brings everyone else into that sort of frame of mind, like this is a really cool big situation. His attitude is almost matching that of Trevor, which is, for as many guys being as passionate as he is, it's awesome." Kim is relishing his moment in the spotlight at Quail Hollow, beaming with pride as he carries the International Team's logo on his clothes and golf bag. "It's hard to put into words about how pumped I am," said Kim, who picked his English name due to a fondness to Thomas the Tank Engine, a character from a children's book, when he was a kid. "I'm the youngest guy on the team, and I'm a big jokester. So playing that role, I feel like I can bring good energy and, you know, bring enlightenment to the team." Kim, along with his International teammates, will certainly be hoping to have the last laugh come Sunday. The teams: The US team: Scottie Scheffler (No. 1 in the world), Patrick Cantlay (No. 4), Xander Schauffele (No. 5), Justin Thomas (No. 7), Collin Morikawa (No. 9), Sam Burns (No. 12), Jordan Spieth (No. 13), Tony Finau (No. 14), Billy Horschel (No. 15), Max Homa (No. 16), Cameron Young (No. 18) and Kevin Kisner (No. 25). The International team: Hideki Matsuyama (No. 17), Sungjae Im (No. 19), Joohyung "Tom" Kim (No. 22), Corey Conners (No. 26), Adam Scott (No. 30), K.H. Lee (No. 43), Mito Pereira (No. 49), Sebastian Munoz (No. 63), Cam Davis (No. 66), Christiaan Bezuidenhout (No. 67), Si Woo Kim (No. 76) and Taylor Pendrith (No. 109). /IANS