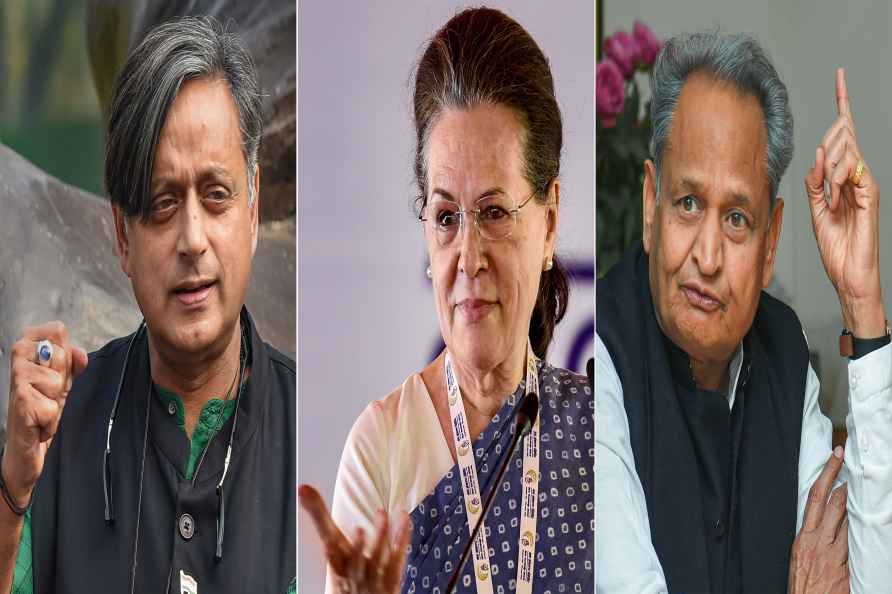 [**EDS: COMBO PHOTO** New Delhi: File photos of (L-R) Shashi Tharoor, Sonia Gandhi and Ashok Gehlot. After more than two decades, the Congress is likely to see a non-Gandhi contest for the post of its chief, with Shashi Tharoor and Rajasthan Chief Minister Ashok Gehlot likely to run for the AICC presidential poll. ( /PTI] New Delhi, Sep 21 : Rajasthan Chief Minister Ashok Gehlot on Wednesday said that he will not back out if the party wants him to contest the Congress presidential poll. Gehlot, who arrived at the national capital this morning, was interacting with the media. "I will not back out from any responsibility and will serve the party wherever and in whichever capacity I am required in this hour of crisis," he said. However, he said the party wants Rahul Gandhi to take over as the party president. Gehlot said that will discharge all the responsibilities given and hinted that he can manage the posts of both --the party chief and chief minister-- simultaneously. The chief minister said that he is not aspiring for any post but wants to work towards ousting the "fascist" (BJP) government. Meanwhile, Congress MP Shashi Tharoor on Wednesday arrived at the AICC office to check the delegate list ahead of the notifications of the Congress presidential polls as he braces himself to file nomination papers. Tharoor is being seen as a potential candidate from G-23 group to challenge the loyalist in case of contest. Chief Minister Gehlot is likely to meet Congress chief Sonia Gandhi and then expected to join the "Bharat Jodo Yatra" with Rahul Gandhi in Kerala. "Everybody wants a stronger Congress and all parties must follow a democratic process. The elections in the party are open for all Congress members." On Tuesday night, Gehlot addressed Rajasthan party MLAs and hinted at his nomination. He is tipped to be the presidential candidate for the Congress poll. /IANS