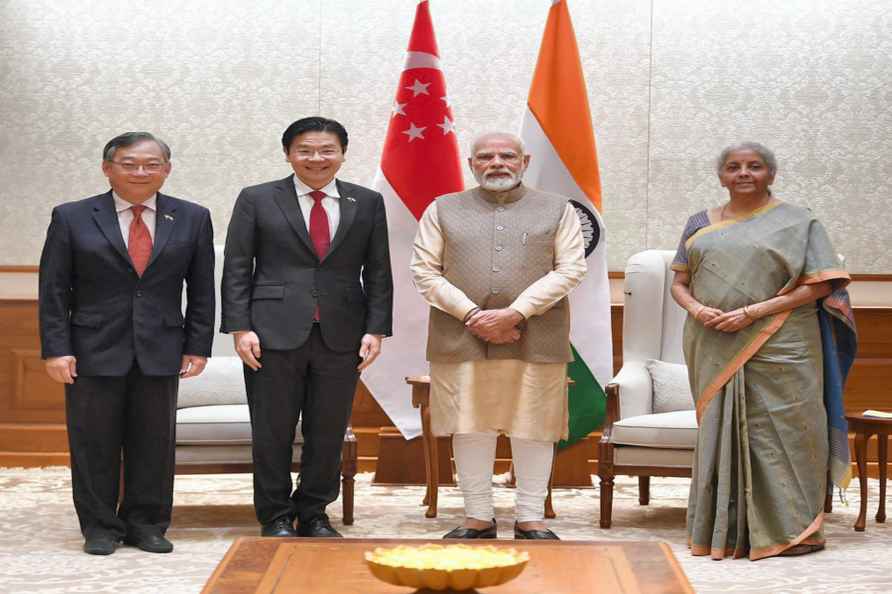 [**EDS: IMAGE VIA @narendramodi, MONDAY, SEPT. 19, 2022** New Delhi: Prime Minister Narendra Modi with Dy PM and Finance Minister of Singapore Lawrence Wong, Minister of Trade & Industry Gan Kim Yong and Union Finance Finister Nirmala Sitharaman, in New Delhi. ( /PTI] New Delhi, Sep 19 : A joint India-Singapore ministerial delegation, including Singapore's Deputy Prime Minister Lawrence Wong, who is also the island nation's Finance Minister, called on Prime Minister Narendra Modi on Monday. The ministers briefed the Prime Minister about the outcomes of the inaugural session of the India-Singapore Ministerial Roundtable (ISMR), which was held here on September 17. This is Wong's first visit to India in his capacity as the Deputy Prime Minister. "The establishment of the ISMR is a path-breaking initiative which was envisioned by Modi and reflects the unique nature of the India-Singapore bilateral relationship. The ministers briefed the Prime Minister about the wide-ranging discussions held, especially in emerging areas of digital connectivity, fintech, green economy, skill development and food security," a statement issued by the Prime Minister's office said. The Prime Minister conveyed his appreciation and hoped that initiatives like ISMR would help further strengthen the bilateral relations between the two countries. He also conveyed his good wishes for Prime Minister Lee Hsien Loong and the people of Singapore. /IANS