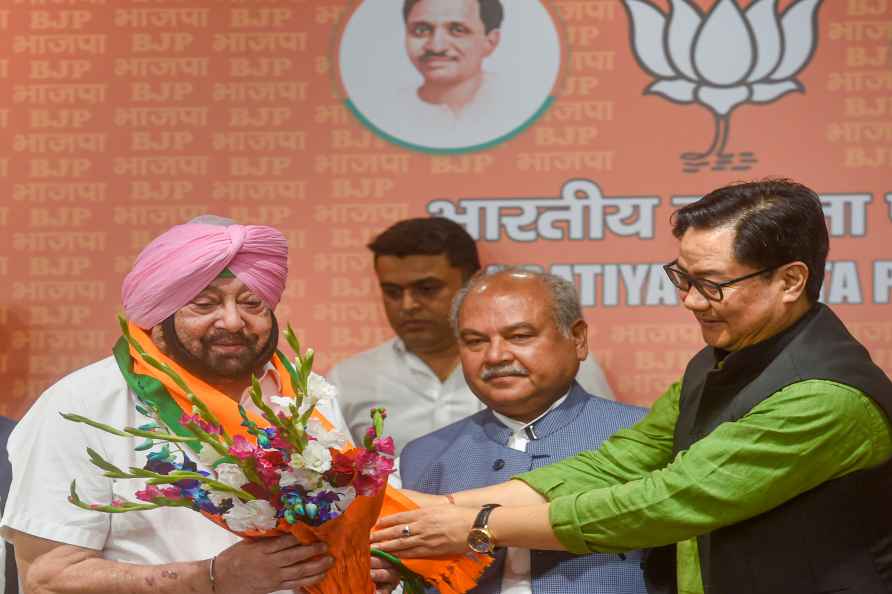 [New Delhi: Former Punjab CM Amarinder Singh being welcomed by Union Ministers Kiren Rijiju and Narendra Singh Tomar as he joins Bharatiya Janata Party (BJP), in New Delhi, Monday, Sept. 19, 2022. Singh also merged his newly formed Punjab Lok Congress (PLC) with the BJP. ( /PTI] New Delhi, Sep 19 : Congress leader Deepender Singh Hooda on Monday termed former Punjab Chief Minister Amarinder Singh's decision to join the BJP as a wrong decision as after the farmers' protest it will not be appreciated by the people. Amarinder Singh was asked to step down as the Chief Minister of Punjab in September last year by the Congress following a power tussle within the party, and in subsequent Assembly election the party was wiped out. Ahead of his joining the BJP, Singh met the party president J.P. Nadda. Speculation of Amarinder Singh joining the BJP had grown stronger after he met Union Home Minister Amit Shah on September 12. "Had a very productive meeting with Hon'ble Union Home Minister Amit Shah. Discussed various issues pertaining to national security, the rising cases of narco-terrorism in Punjab and the future roadmap for the overall holistic development of Punjab," Singh had tweeted after meeting Shah. Singh had floated his own party after quitting the Congress last year citing humiliation by the grand-old party. The two-time chief minister of Punjab had fought the Assembly elections in the state earlier this year in alliance with the BJP as well as Akali Dal (Sanyukt). His party -- Punjab Lok Congress -- had failed to get even a single seat during the Assembly elections. Singh himself lost from his hometurf Patiala urban constituency. /IANS