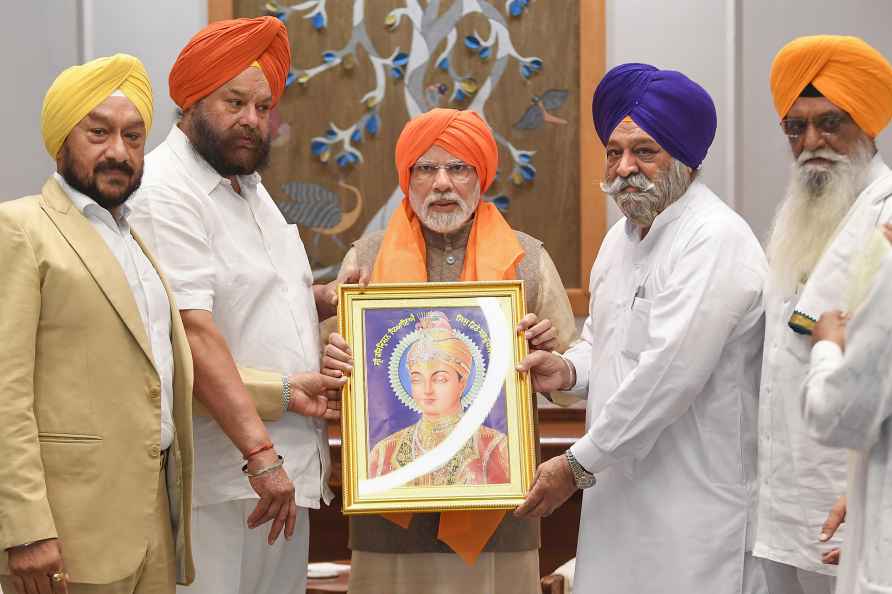 [**EDS: IMAGE VIA PIB** New Delhi: Prime Minister Narendra Modi at a meeting with a Sikh delegation at his residence, 7 Lok Kalyan Marg, in New Delhi, Monday, Sept. 19, 2022. ( /PTI] New Delhi, Sep 19 : A delegation of Gurudwara Bala Sahib visited Prime Minister Narendra Modi at his official residence on Monday. They offered him 'prasad' and blessings and honoured the Prime Minister by tying a 'Pagdi' and offering him a 'Siropa'. An 'ardas' was also performed for the Prime Minister's long life and good health. The Gurudwara had organised an 'Akhand paath' between September 15 and 17 to commemorate the Prime Minister's birthday. This 'Akhand paath' was attended by thousands of Sikh devotees, a statement said. The Prime Minister expressed his happiness on meeting the delegation and thanked them for their wishes and prayers for his well-being. He said that he was humbled and deeply touched by their gesture for making him feel a part of the Sikh community. He reiterated the commitment of the government for continuously working towards the welfare of the Sikh community. During the meeting, the delegation also thanked the Prime Minister for the path-breaking initiatives taken by him for the honour and welfare of the Sikh community. They recounted several efforts made by the Prime Minister, including declaring December 26 as 'Veer Baal Divas', reopening the Kartarpur Sahib Corridor, removal of GST on langars run by gurdwaras and ensuring that the copies of Guru Granth Sahib reached India from Afghanistan, among others. /IANS