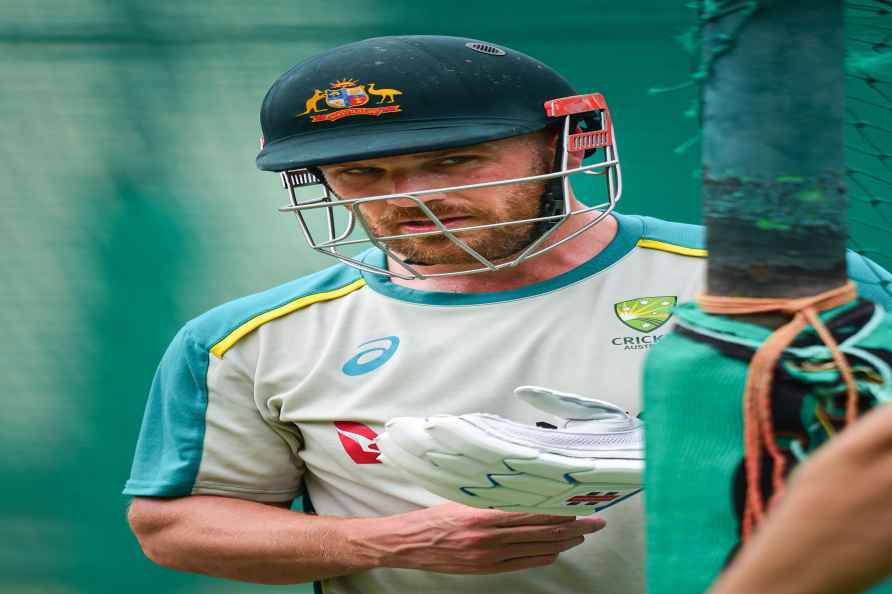 [Mohali: Australian cricketer Aaron Finch during a practice session ahead of the first match of the 3-match T20 cricket series between India and Australia, in Mohali, Monday, Sept. 19, 2022. ( /PTI] By Avinash Kr Atish Mohali, Sep 19 : The Indian cricket team will continue their search for an ideal playing XI before the all-important Men's T20 World Cup when they take on a well-balanced Australian side in the first T20I of the three-match series at the Punjab Cricket Association IS Bindra Stadium, here on Tuesday. India's lacklustre campaign at the recently concluded Asia Cup 2022 had raised some serious questions but the selectors have picked up almost the same squad for the T20 World Cup in Australia. The continuity of similar faces shows that skipper Rohit Sharma, head coach Rahul Dravid and selectors have not pressed the panic button yet and trusting the boys to come good in upcoming matches. However, the team management will still look to fix some issues and try out a few more things in order to finalise their best possible eleven. As far as the batting is concerned, the top four consisting of Rohit Sharma, KL Rahul, Virat Kohli and Suryakumar Yadav pick themselves up automatically, and Hardik Pandya with his valuable all-round ability, is also a sure-shot starter. The biggest question is who will play as the wicket-keeper -- Rishabh Pant or Dinesh Karthik? During the Asia Cup, Karthik started as India's first-choice wicket-keeper but injury to all-rounder Ravindra Jadeja forced the team management to bring in left-hander Pant, who didn't look convincing and so far hasn't been able to justify his talent in T20I cricket like the Test and ODIs. The idea to use a left-handed batter in the middle overs was to counter the left-arm spinner, and Australia also have a similar bowler in Ashton Agar. So, Pant can get the preference over Karthik, who is known for his finishing prowess. Despite being a like-for-like replacement for Jadeja, Axar Patel didn't get a game at the Asia Cup. Deepak Hooda, who can bowl a few overs and gives captain an extra option, got the opportunity to play but he wasn't used in the bowling at all. Also, Hooda's success has mostly come as a top-order batter but he was given the job to finish the innings in the multi-team event in Dubai. So, it will be interesting to see whether Dravid and Rohit show confidence in the all-round ability of Axar or once again Hooda gets the nod. On the other hand, India's bowling attack will be bolstered by the return of Jasprit Bumrah and Harshal Patel. Both Bumrah and Harshal had missed the Asia Cup 2022 due to injuries and they will be keen to make their mark and get into the groove during the three-match series. After being expensive in back-to-back matches against Pakistan and Sri Lanka, Bhuvneshwar Kumar finished his Asia Cup campaign on a high with a superb performance against Afghanistan, and he will hope to continue that. Team India also might give a chance to Umesh Yadav, who has replaced Md Shami in the squad. The likes of Yuzvendra Chahal and Ravichandran Ashwin are the spin options apart from Axar. Overall, India's playing XI in the first match will give a bit of clarity on their thinking and approach for the World Cup. Meanwhile, the Aaron Finch-led Australia will miss the services of Mitchell Starc, Marcus Stoinis and Mitchell Marsh for the entire three-match T20I series in India. Starc (knee), Marsh (ankle) and Stoinis (side) will all stay home due to their 'minor' injuries, alongside David Warner who had been already rested from making the trip. Despite missing their key players, T20 World Cup defending champions Australia have a well-balanced squad. The five specialist batsmen, five all-rounders and five specialist bowlers have the look of a balanced and winner side. However, the run drought of Australian skipper Aaron Finch is a big concern for them and India will look to exploit that. Eyes will be also on the supremely talented Tim David. Raised in Western Australia, David played 14 Twenty20 internationals for Singapore. After creating a name for himself in franchise leagues all over the world, the hard-hitter was bought by Royal Challengers Bangalore before being acquired for Rs. 8.25 crore by Mumbai Indians in the auction last March. However, after two early failures, David was benched and later included for the second half by which time Mumbai Indians' chances of the playoffs were over. David did have a role to play in those late victories for his franchise and the 26-year-old will be keen to prove himself in Indian conditions. Also, with many members of this Australian squad familiar with the conditions in India due to their IPL experience, India won't have that home advantage. Players like skipper Aaron Finch, Steve Smith, Glenn Maxwell, Pat Cummins, Josh Hazlewood, and Kane Richardson, among others, have spent enough time in India to know what it takes to succeed at the top-level. Unlike other visiting teams, Australia have a solid record in India in T20Is and the hosts will also aim to continue their domination at home. So, overall, the stage is set for a mouth-watering clash in Mohali. Squads: India: Rohit Sharma (Captain), KL Rahul (vice-captain), Virat Kohli, Suryakumar Yadav, Deepak Hooda, Rishabh Pant (wicket-keeper), Dinesh Karthik (wicket-keeper), Hardik Pandya, R. Ashwin, Yuzvendra Chahal, Axar Patel, Bhuvneshwar Kumar, Umesh Yadav, Harshal Patel, Deepak Chahar, Jasprit Bumrah. Australia: Sean Abbott, Ashton Agar, Pat Cummins, Tim David, Nathan Ellis, Aaron Finch (c), Cameron Green, Josh Hazlewood, Josh Inglis, Glenn Maxwell, Kane Richardson, Daniel Sams, Steve Smith, Matthew Wade, Adam Zampa /IANS