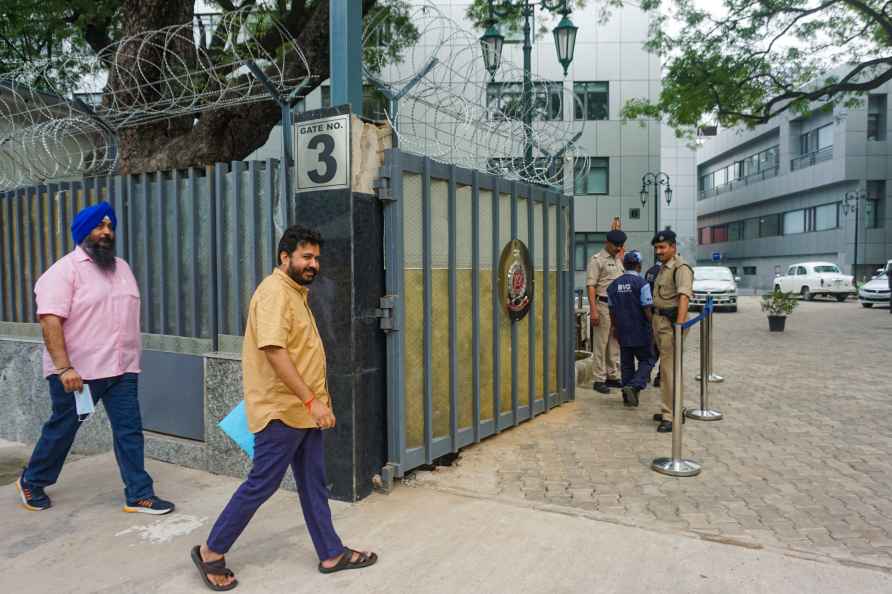 [New Delhi: AAP MLA Durgesh Pathak arrives at the office of Enforcement Directorate (ED) for questioning in connection with its probe into Delhi excise policy, in New Delhi, Monday, Sept. 19, 2022. ( /PTI] New Delhi, Sep 19 : In a latest development in connection with the Delhi's excise policy scam, the Enforcement Directorate has reportedly summoned Aam Aadmi Party's MCD poll in-charge and Rajinder Nagar MLA Durgesh Pathak. Delhi's Deputy Chief Minister Manish Sisodia tweeted on Monday morning that the ED has summoned Pathak and criticised the probe agency, asking if the aim was to target the MCD polls instead of the liquor policy. "Their target is excise policy or upcoming MCD election," Sisodia tweeted. The ED has not commented on the matter as of now. The case is on the basis of the FIR of the Central Bureau of Investigation (CBI). The CBI has made Sisodia the accused number one in its FIR. The CBI's FIR has been lodged under sections 120-B (Criminal Conspiracy) and 477-A (Falsification of accounts) of the IPC. The allegations against Sisodia is that liquor businessmen were allegedly given exemption of Rs 30 crore. The licence holders were allegedly given extension according to their own will. The policy rules were made by violating excise rules. It also said that Sisodia and a few liquor barons were actively involved in managing and diverting the undue pecuniary advantage collected from liquor licensees to public servants, who have been made accused in the case. "Manish Sisodia, Deputy Chief Minister of Delhi, Arva Gopi Krishna, the then Commissioner (Excise), Anand Tiwari, the then Deputy Commissioner (Excise), and Pankaj Bhatnagar, Assistant Commissioner (Excise) were instrumental in recommending and taking decisions pertaining to the excise policy for the year 2021-22 without approval of competent authority with an intention to extend undue favours to the licencees post tender," read the FIR, which has been accessed by IANS. /IANS