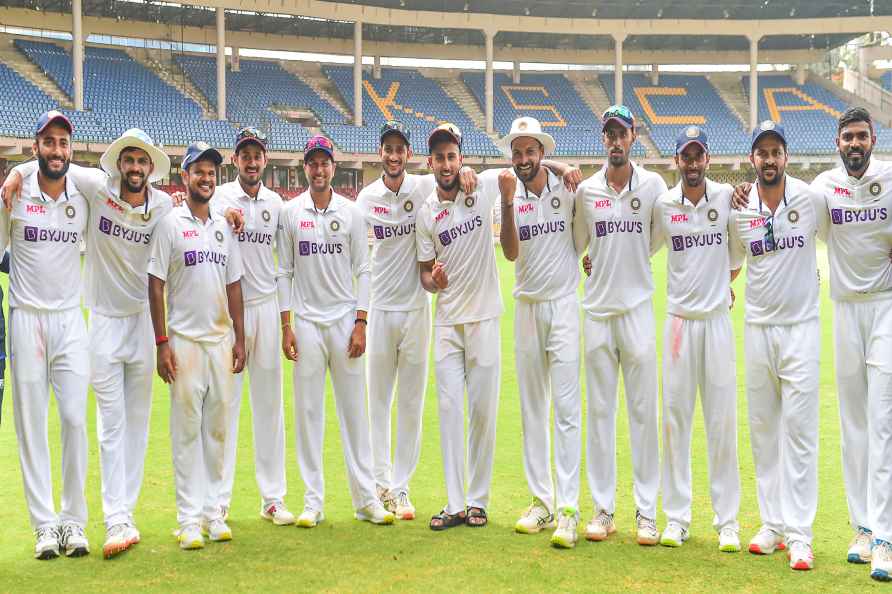 [Bengaluru: India A players celebrate their win over New Zealand A during the fourth day of the 3rd unofficial test cricket match between India A and New Zealand A, at Chinnaswamy Stadium in Bengaluru, Sunday, Sep. 18, 2022. India A won the match by 113 runs and won the series 1-0. ( /PTI] New Delhi, Sep 18 : India fast bowler Navdeep Saini on Sunday has been officially ruled out of ongoing Duleep Trophy and India A's upcoming one-day matches against New Zealand A due to a right groin injury. All-rounder Rishi Dhawan has been named as Saini's replacement in the India A squad. Saini is now headed to the National Cricket Academy (NCA) in Bengaluru for further management of his injury. "Navdeep Saini sustained a right groin injury on Day 1 of the Duleep Trophy semi-final match between North Zone and South Zone. He is ruled out of the ongoing tournament and also from the upcoming three-match one-day series between India A and New Zealand A." "Saini will now head to the NCA for further management of his injury. The All-India Senior Selection Committee has named Rishi Dhawan as Saini's replacement in India A squad," said the BCCI in an official release. Earlier, due to hamstring issues, Saini had to be pulled out of bowling from North Zone's semi-final game against South Zone in Salem. In South Zone's first innings, the pacer bowled only 11.2 overs (1/58) before suffering the injury. However, he batted in the team's first innings (made four runs). In the second innings, Saini did not bowl, thereby increasing queries over his future participation. Saini had turned out for Kent in this year's county championship, picking eleven wickets in two matches and scalped five wickets in as many matches during the side's winning run in Royal London One-Day Cup. India A side, led by wicketkeeper-batter Sanju Samson, will face off against New Zealand A in three matches at Chennai on September 22, 25 and 27 at the MA Chidambaram Stadium. India A squad: Prithvi Shaw, Abhimanyu Easwaran, Ruturaj Gaikwad, Rahul Tripathi, Rajat Patidar, Sanju Samson (Captain), KS Bharat (wicket-keeper), Kuldeep Yadav, Shabhaz Ahmed, Rahul Chahar, Tilak Varma, Kuldeep Sen, Shardul Thakur, Umran Malik, Rishi Dhawan, Raj Angad Bawa. /IANS