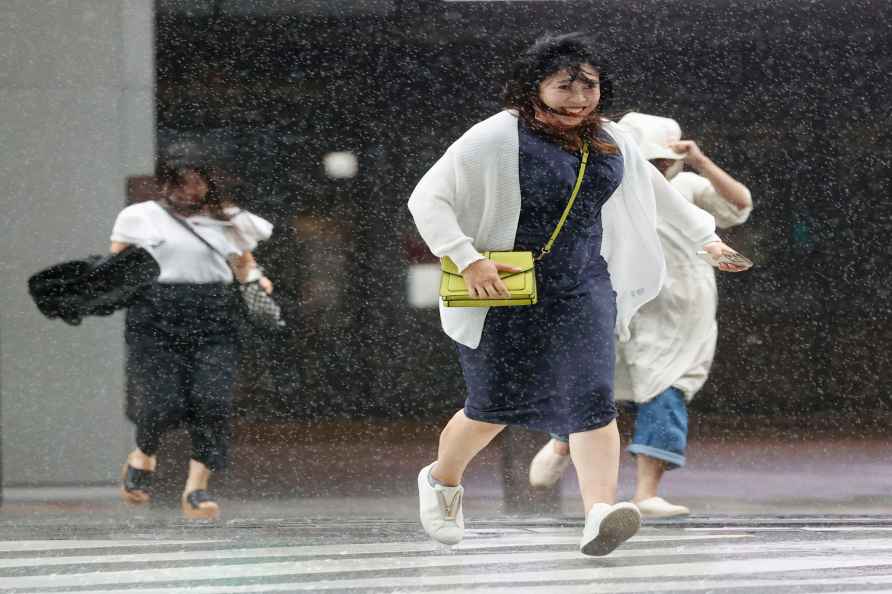 [People make their way through the strong wind and rain in Kagoshima, southern Japan, Sunday, Sept. 18, 2022, as a powerful typhoon pounded southern Japan. ( /PTI] Tokyo, Sep 18 : Japan's southwestern region of Kyushu on Sunday braced for the possibility of a large and powerful typhoon landing, with the weather agency warning of unprecedented winds and waves. "The southern part of the Kyushu region may see the sort of violent wind, high waves and high tides that have never been experienced before," the Japan Meteorological Agency (JMA) said Sunday, urging residents to exercise "the highest caution possible." A level 5 alert, the highest on Japan's disaster warning scale, was issued to more than 110,000 people in about 55,000 households in Kagoshima and Miyazaki Prefectures, with level 4 evacuation orders in place in cities such as Kagoshima, Miyazaki and Amakusa, Xinhua news agency reported quoting public broadcaster NHK reported on Sunday. According to the JMA, the eye of Typhoon Nanmadol is south of Kyushu as of Sunday morning. It is slowly making its way in a north-northwesterly direction over the sea 30 km southeast of Yakushima island and packing gusts up to 252 km per hour. Nanmadol, the 14th of the year, is forecast to make landfall in Kyushu on Sunday evening, before curving northeast and traveling across Japan's largest island, Honshu, through early Wednesday. The weather agency issued a special typhoon warning for Kagoshima Prefecture on Saturday night, an alert that is issued only when it forecasts dangerous conditions seen once in several decades, marking the first time the agency has issued a such warning for an area apart from Okinawa Prefecture. Weather officials also warned that rain and winds could intensify even in areas far from the typhoon. Heavy precipitation is expected in western and some parts of eastern Japan through Monday. /IANS