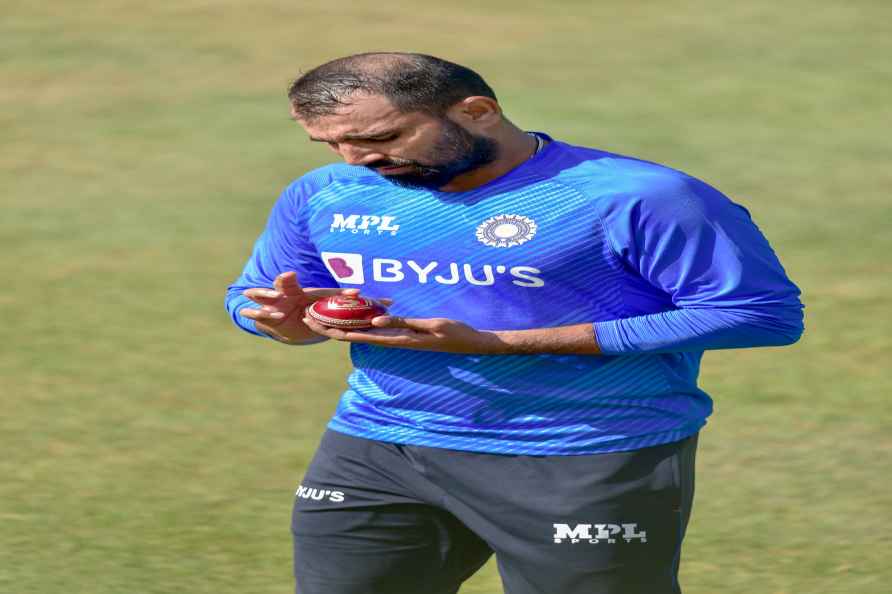 [**EDS: FILE PHOTO** Mohali: In this Wednesday, March 2, 2022 file photo, Indian bowler Mohammed Shami during a practice session ahead of the 1st test cricket match between India and Sri Lanka, at IS Bindra PCA Stadium in Mohali. Shami was ruled out of the three-match T20 cricket series against Australia after he had tested positive for COVID-19, late on Saturday night, Sept. 17, 2022. ( /PTI] Mohali, Sep 18 : Senior India fast-bowler Mohammed Shami on Sunday has been ruled out of the upcoming T20I series against Australia after testing positive for Covid-19, said the Board of Control for Cricket in India (BCCI). The BCCI further said that pacer Umesh Yadav will replace Shami for the three-match series against Australia, starting from September 20 in Mohali. Notably, Umesh recently returned from his county stint with Middlesex in England, due to a quad muscle injury and was supposed to go for rehab. "Fast bowler Mohd. Shami will not be able to take part in the upcoming three-day Mastercard T20I series against Australia after testing positive for COVID-19. The All-India Senior Selection Committee has named Umesh Yadav as his replacement," said the BCCI in an official release. Shami had not played any competitive cricket after playing in the ODI series against England in July 2022. He has not played a T20I for India since their campaign in the T20 World Cup ended at Super 12 stage in the UAE in November 2021. But his vast experience, and his performance in the IPL 2022, where he picked 20 wickets in 16 matches for champions Gujarat Titans, including 11 wickets in power-play, were sufficient to get him as a standby for the T20 World Cup in Australia to be held next month. The T20Is against Australia, starting from first game in Mohali on Tuesday, followed by second game in Nagpur on September 23 and final match on September 25 in Hyderabad, and then another three-match T20I series against South Africa on September 28, October 2 and 4, had provided India to test Shami in terms of performance, fitness and preparation. For Umesh, who last played a T20I match for India in February 2019, it is a chance for him to play for the country in the shortest format of the game in almost two and a half years. In IPL 2022, Umesh picked 16 wickets for Kolkata Knight Riders at an average of 21.18 and economy rate of 7.06. In Middlesex's Royal London One-Day Cup campaign, he picked 16 wickets at an average of 20.25 and economy rate of 5.17. India squad for Australia T20I series: Rohit Sharma (Captain), KL Rahul (vice-captain), Virat Kohli, Suryakumar Yadav, Deepak Hooda, Rishabh Pant (wicket-keeper), Dinesh Karthik (wicket-keeper), Hardik Pandya, Ravichandran Ashwin, Yuzvendra Chahal, Axar Patel, Bhuvneshwar Kumar, Harshal Patel, Deepak Chahar, Jasprit Bumrah, Umesh Yadav. /IANS