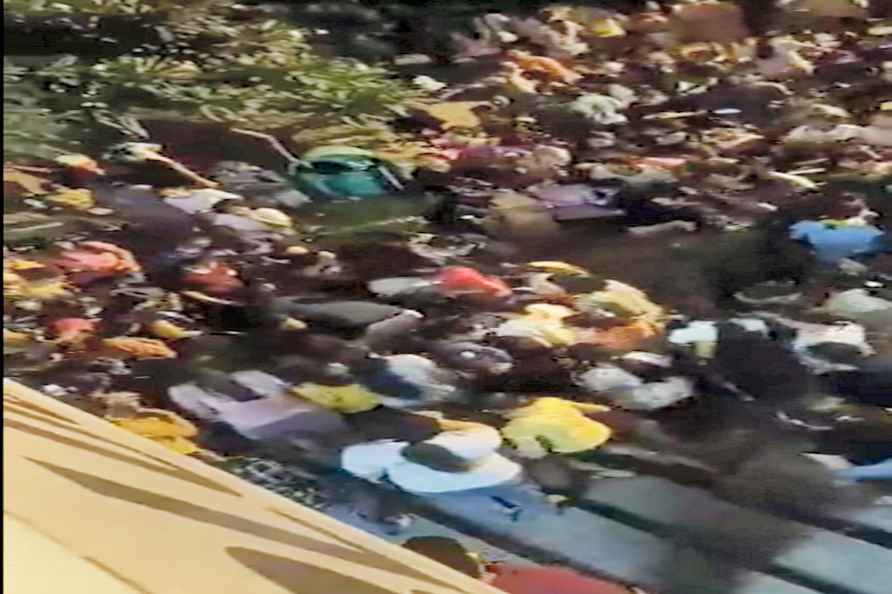 [**EDS: VIDEO GRAB** Mohali: Students of the Chandigarh University protest on the campus after private videos of several women students were posted on social media, in Mohali, Saturday night, Sept. 17, 2022. A woman student who was allegedly involved in sharing the videos online has been apprehended. ( /PTI] Chandigarh, Sep 18 : A woman hosteller studying MBA in a private university in Punjab's Mohali was detained by police on Sunday on charges of making a porn video and MMS of fellow hostellers. Senior Superintendent of Police Vivek Soni categorically told the media that no attempt to suicide was reported after the incident came to light. Also, he said, so far there was no evidence of the video being made viral. "As per the investigation, the accused made her own video and no video of other students was made. There was no evidence so far. There is so much misinformation and rumours doing rounds. We should respect the modesty of the accused student as we are investigating the matter," he said. Soni appealed to the public and the students to maintain calm and help police to investigate the matter. As per reports, the accused hosteller illegally sent the nude images and videos to a male friend in Shimla, resulting in the footage being circulated online. As the video went viral, a massive ruckus on the campus of Chandigarh University erupted overnight with crowds of hostellers staging a massive protest. Students shouted slogans: 'We want justice'. During the protest, police had to cane-charge students to disperse them. AAP chief and Delhi Chief Minister Arvind Kejriwal reacted to the incident and urged the people to act with patience. "In Chandigarh University, a girl has gone viral by recording objectionable videos of many girl students. This is very serious and shameful. All the culprits involved in this will get the harshest punishment. Victim girls have courage. We are all with you. All act with patience," he said in a tweet. Requesting the students to keep calm, state Minister of School Education Harjot Singh Bains said, "No one guilty will be spared. It's a very sensitive matter and relates to dignity of our sisters and daughters. We all including media should be very very cautious, it is also test of ours now as a society." Punjab State Women Commission Chairperson Manisha Gulati, who reached the university, clarified on the rumours around victims of alleged video and MMS scandal attempting suicide. "The probe is underway and law will take its course," she said, asking the commission to inspect all universities so that such incidents did not reoccur. "The police are investigating the entire incident and we are assisting them," said Satnam Singh Sandhu, Chancellor, Chandigarh University. /IANS