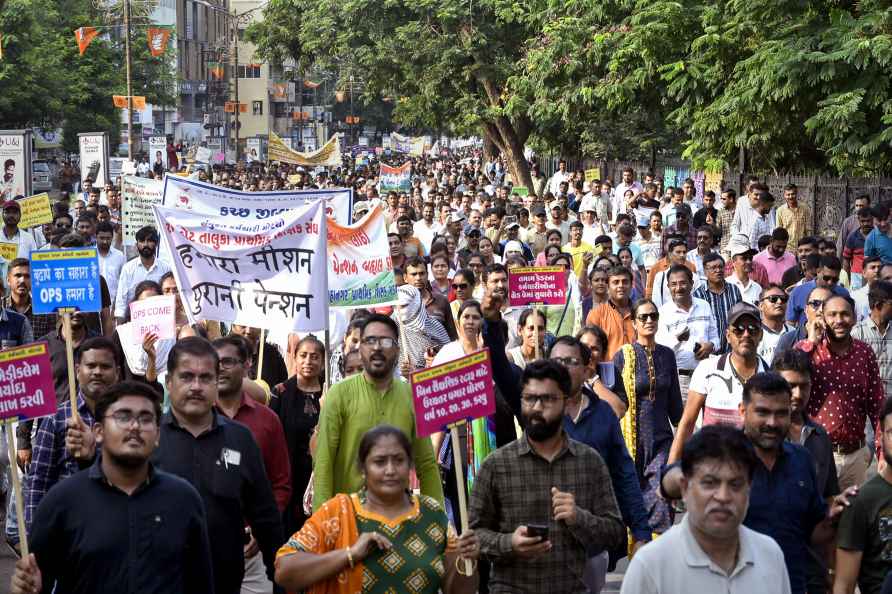 Gandhinagar, Sep 17 : Lakhs of teachers and government employees from various departments in Gujarat have gone on Mass Casual Leave (CL) on Saturday despite their association's leaders agreeing to the government announcement. On Friday evening, the state government announced that it has accepted 14 demands of teachers and other government employees, which was not accepted by larger members of these associations. As per the understanding, employees appointed before April 2005 will be included in the old pension scheme, and the C.P.F contribution will be increased 10 to 14 per cent. Office-bearers of National Old Pension Restoration Federation Gujarat Gujarat State has accepted the state announcement and cancelled mass CL protest call for Saturday. Labhugiri Goswami, senior vice-president of the Kutch Prathmik Shaikshik Sangh told IANS that alone in Kutch at least 5,000 teachers have joined the mass CL call, because members are unhappy with the state government's announcement as it does not fulfill the demand. Ahmedabad district teacher's leader Tejasbhai has alleged that the state government has tried to divide and rule, it has announced that employees appointed before April 01, 2005 will be included in old pension scheme, what about employees appointed April 01, 2005, the main demand is to cover all employees under the Old Pension Scheme, which not fulfilled. So today teachers, panchayat employees and even other departments have joined the mass CL protest, the agitation will continue. The state government on the other side have instructed department heads and district heads to take action against employees who have joined mass cl protest, because the association has agreed with the statement and the mass cl protest was called off. /IANS

Women more than twice as likely as men to report feeling bloated
New York, Nov 25 : Nearly one in seven Americans experience bloating on a weekly basis, and most aren't seeking professional care for it, and women ar

Twitter 'Verified' next week, all accounts to be manually authenticated: Musk
New Delhi, Nov 25 : Elon Musk on Friday said Twitter will tentitavily relaunch 'Verified' service on Friday next week and all verified accounts will b