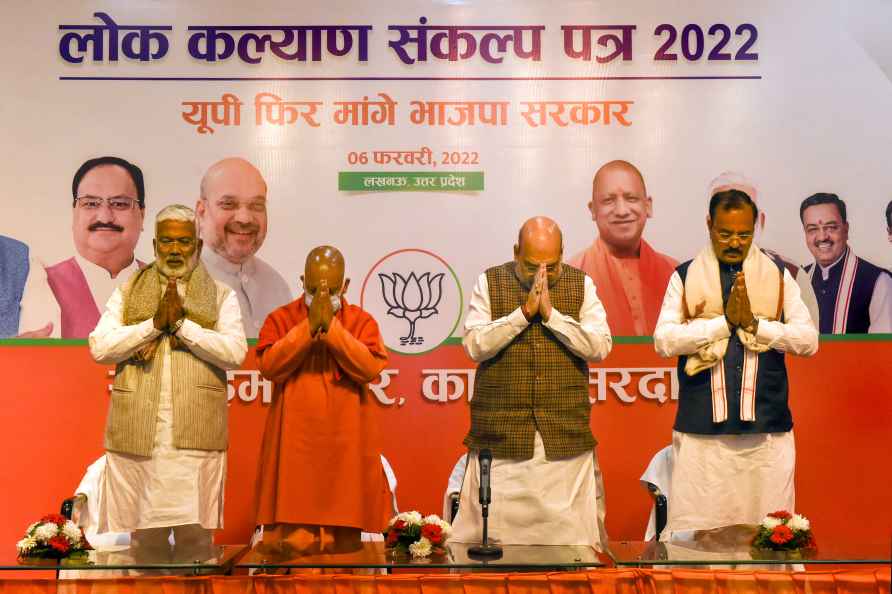 By Amita Verma Lucknow, Sep 17 : In December 2023, just months before the Lok Sabha elections in 2024, the sanctum sanctorum of the grand Ram temple will be thrown open to devotees. As euphoria fills the air, the Gyanvapi dispute will also be simmering in the communal cauldron and Mathura will also be waiting to be served hot by then. The BJP has got all its calculations in place and has finalised a perfect recipe for return to power at the Centre in the general elections. Despite RSS chief Mohan Bhagwat's advice to 'stop searching for a 'Shivling' under every monument', the BJP is forging ahead with its temple agenda. Uttar Pradesh deputy chief minister Keshav Prasad Maurya, during the UP assembly elections, had tweeted "Ayodhya-Kashi jaari hai, Mathura ki tayyari hai" which was a clear indication of the party's game plan. Soon after the court upheld the maintainability of pleas by five Hindu women this week, Maurya put out a pinned tweet that read "karvat leti Mathura, Kashi" (things are turning in Mathura and Kashi). Later, however, he pointed out that the tweet was 'personal'. According to party strategists, the BJP may not make an all-out effort to cash in on the situation in Ayodhya, Kashi and Mathura but the developments are bound to benefit the party - directly or indirectly. "We are a Hindu-centric party and our leaders have fought for liberation of shrines that were demolished by invaders." "For Ayodhya, we waged a long battle and now the dream of Ram temple is turning into reality. This is undoubtedly going to benefit us," said a senior party functionary. The functionary, however, pointed out that the BJP had no direct involvement in the Kashi and Mathura issues. Former union minister Uma Bharti said, "I pray that the courts will rule in our favour in Mathura and Kashi just as the SC did in the Ayodhya case because the structures that currently exist (Gyanvapi and Shahi Idgah) remind Hindus of how Muslim invaders destroyed our temples and oppressed us." Interestingly, while the BJP in UP forcefully underlines the good governance factor and the welfare schemes of the Yogi Adityanath government that are reaching out to the poor, it also continues to emphasize on its pro-Hindu leanings. Its leaders begin their speeches with 'Jai Shri Ram' and 'Har Har Mahadev' and have no qualms about donning saffron. Yogi Adityanath's office put out more photographs of his offering prayers at various temples than those of his inaugurating development projects. The idea is obviously to keep reiterating the fact that religion comes before everything else in his scheme of things. A former BJP MP said, "If the governance factor provides a good base for the party, it is the Hindutva factor that comes as the icing on the cake. In fact, people have begun to rely more on Hindutva and I believe that it is this that will ensure our return to power in 2024." Significantly, the Places of Worship (Special Provisions) Act that was enacted by Parliament in 1991 with the specific purpose of preventing such legal suits or demands against historic religious structures -- apart from the Ayodhya issue -- is now being challenged before the Supreme Court. The fact that a court has allowed such pleas could open the floodgates for similar cases being filed against other historic Islamic monuments. This, again, is what the BJP wants in the coming months. The political landscape in Uttar Pradesh is already deeply divided by communal polarisation and the ruling BJP is eager to stoke the fires further for electoral gains. The legal difference between the Varanasi and Ayodhya cases is likely to be lost on the ever-increasing cheerleaders of Hindutva. Reclaiming the Gyanvapi and Shahi Idgah -- among sundry other Islamic sites -- for the Hindus has been a stated plank of the RSS-BJP combine for a long time. There is jubilation in the BJP ranks and its cadres are already terming the Varanasi court verdict as a "victory for Hindus". /IANS

Challenge to Places of Worship Act: Ruling will steer political, electoral discourse
New Delhi, Sep 17 : The Hindu devotees seeking the right to worship at the Gyanvapi mosque have won the first hurdle of what appears to be a long-draw

BJP elated over verdict, sees its temple agenda moving as per plan
By Amita Verma Lucknow, Sep 17 : In December 2023, just months before the Lok Sabha elections in 2024, the sanctum sanctorum of the grand Ram templ

Mosque management prepares for a long legal battle
Lucknow, Sep 17 : The Ayodhya verdict has not dampened the Muslims and after the Varanasi verdict, the community is bracing up for a legal battle - ho