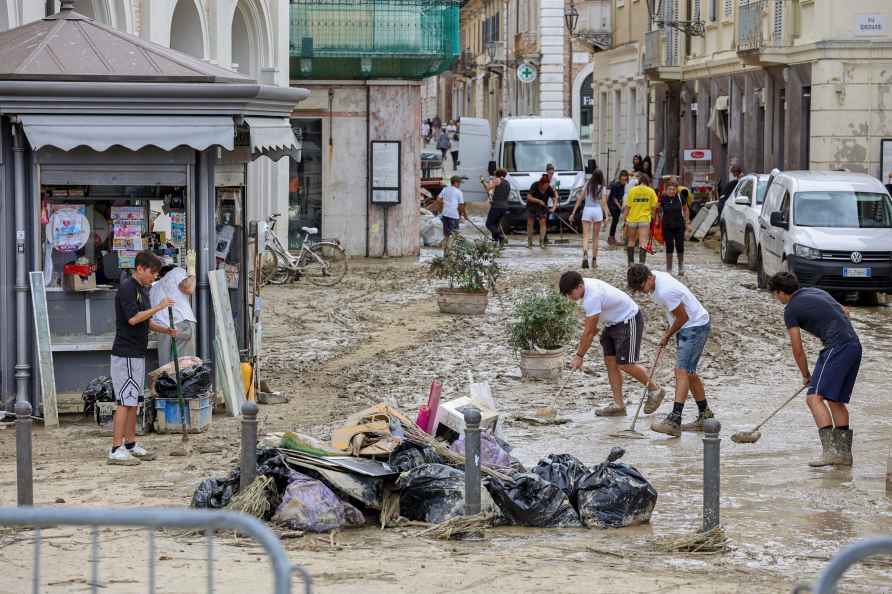 [People remove mud from a street in Senigallia, central Italy, Friday Sept. 16, 2022. Flash floods triggered by heavy rain have swept through towns in a hilly central Italy. Â Italy's leader Mario Draghi said 10 people were dead in the floods and four were missing. /PTI] Rome, Sep 17 : At least 10 people were killed and four others remain unaccounted for after flash floods hit the Marche region in Italy, creating what a local mayor described as an "apocalyptic situation". Violent thunderstorms shook Marche and the surrounding areas on Thursday and Friday, sparking flash floods that uprooted trees, destroyed homes and swept away vehicles, reports Xinhua news agency. Rescue officials said the four missing people included an eight-year-old boy. According to Carlo Manfredi, mayor of Castelleone di Suasa town, one of the areas hit hardest by the flooding, the boy was lost after he and his mother had escaped the approaching floodwaters from their car. Manfredi said the mother survived, but the boy was swept away from her arms. Also missing late on Friday were a 17-year-old girl and her mother, aged 56. The authorities did not disclose information about the fourth missing person. According to accounts on social media, dozens of other people managed to escape the floods by climbing onto rooftops or trees. According to news reports, at least six months' worth of rain fell in some areas in the span of a few hours. Severe property damage was reported across Marche and in the neighbouring region of Tuscany, with heavy rainfall also reported in Umbria, Abruzzo, Molise and Lazio in central Italy and in Friuli Venezia Giulia, Lombardy and Liguria in northern Italy. President Sergio Mattarella and Prime Minister Mario Draghi issued statements of solidarity with the residents of the hard-hit areas. Draghi on Friday said that the region would receive the financial support needed to repair the damage and to set up temporary housing for those displaced by the tragedy. So far this year, the weather in Italy has been the most extreme on record. The summer was unusually hot and dry, with water levels of the country's rivers dropping to historic lows, reducing agricultural output by a third or more. The Institute of Atmospheric Sciences and Climate of the National Research Council said in August that 2022 was expected to be the hottest year since records began in 1800. In July, a massive glacier in the Dolomite Mountains collapsed, killing 11 people and severely injuring eight others. Last month, violent thunderstorms ravaged parts of northern Italy, causing flooding and mudslides causing large-scale property damage. /IANS