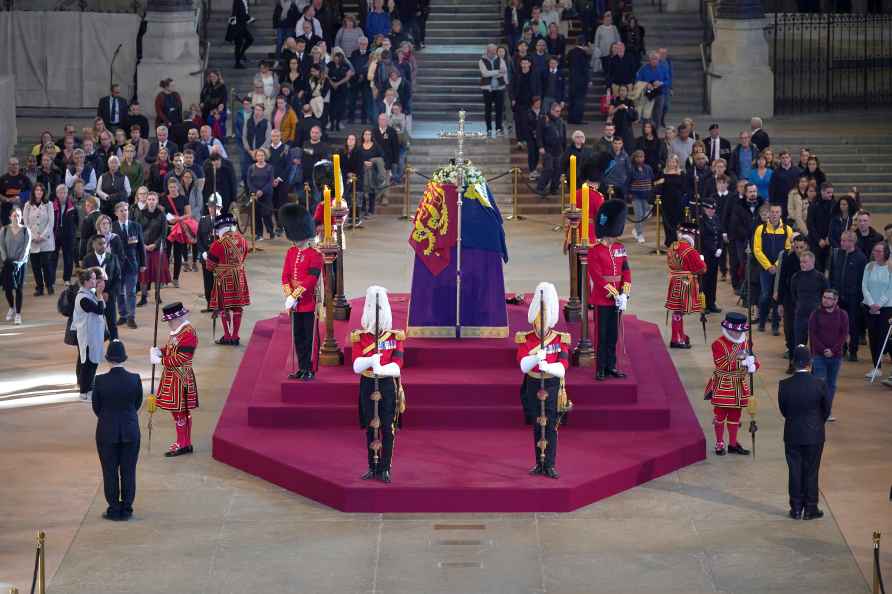 [Members of the public file past the coffin of Queen Elizabeth II, draped in the Royal Standard with the Imperial State Crown and the Sovereign's orb and sceptre, lying in state on the catafalque, in Westminster Hall, at the Palace of Westminster, in London, Friday, Sept. 16, 2022, ahead of her funeral on Monday. /PTI] London, Sep 16 : Preparations for the funeral of Queen Elizabeth II on Monday mean that a shortage of police has led to the postponement of three Premier League matches scheduled for this weekend, with just seven matches to be played. The games between Chelsea and Liverpool, Manchester United and Leeds United and Brighton and Crystal Palace have all been put off due to the lack of police, and while new Chelsea coach, Graham Potter will be grateful for more time to work with his squad and Brighton will be able to find a replacement for Potter, the postponements will only lead to further congest an already crowded fixture calendar. Nottingham Forest and Fulham play a match between two recently promoted sides, with Forest still smarting at how they allowed Bournemouth to come back from 2-0 down to win 2-3 in the last game at the City Ground. While Forrest have struggled, despite (or maybe because of) making 20 summer signings, Fulham have looked solid on their return to the top-flight and Aleksandar Mitrovic is showing that he can repeat his goal-scoring feats from the Championship in the elite. Saturday's game between Wolverhampton and Manchester City pits the league's tightest defense against its best attack, and the big question is whether Wolves will be able to keep the prolific Erling Haaland quiet. Man City's lack of pace out-wide means they sometimes find it hard to break down packed, narrow defenses and Wolves will defend deep and look to play on the break. Newcastle coach Eddie Howe faces his former club when Bournemouth visit St James' Park. Newcastle are without the injured duo of Allan Saint-Maximin and Bruno Guimaraes as they look to turn decent performances into wins, reports Xinhua. Tottenham disappointed in their 2-0 defeat away to Sporting Lisbon in the Champions League in midweek, but have an excellent chance to bounce back when they entertain bottom-of-the-table Leicester City. Leicester travel to unbeaten Tottenham Hotspur with just one win from six games and with coach Brendan Rodgers starting to be seriously questioned. Brentford striker Ivan Toney got his first England call-up on Thursday and will look to celebrate when his side entertain Arsenal. Brentford beat Arsenal on the first day of last season and although Mikel Arteta's side had improved considerably since then, Sunday's game will be another test of their title credentials. Finally, Everton play at home to West Ham, with Frank Lampard's side still searching for their first win of the campaign, while West Ham are probably still smarting from the controversial disallowed goal that saw them denied a late equalizer away to Chelsea two weeks ago. /IANS