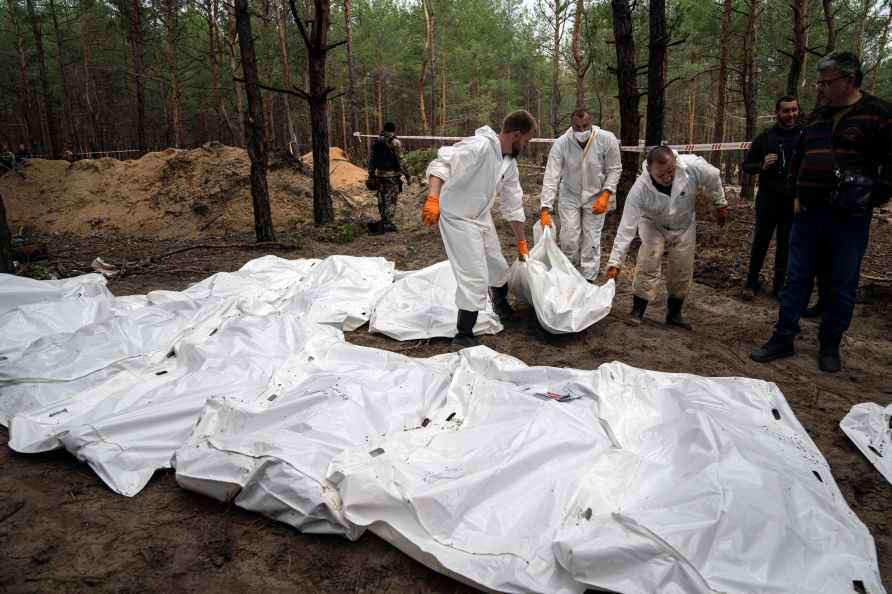 [Experts work during the exhumation of bodies in the recently retaken area of Izium, Ukraine, Friday, Sept. 16, 2022. Ukrainian authorities discovered a mass burial site near the recaptured city of Izium that contained hundreds of graves. It was not clear who was buried in many of the plots or how all of them died, though witnesses and a Ukrainian investigator said some were shot and others were killed by artillery fire, mines or airstrikes. /PTI] Kolkata, Sep 16 : The rich and not so famous in India are maintaining private zoos on their properties and this has promoted the trafficking of wildlife across the India-Bangladesh border. Early on Friday, Border Security Force (BSF) personnel from the 82nd Battalion challenged smugglers attempting to cross over into India from Bangladesh with a heavy crate. The smugglers fled, leaving behind their 'parcel' that contained four Golden Eagles. Golden Eagles are found around the Himalayas in north India and some parts of the country's northeastern states. There have also been some sightings in Gujarat in the recent past. Though the species isn't endangered, experts say that there has been a steady decline in their numbers in the wild. Even if sufficient numbers of these majestic raptors do exist in the wild in India, they can't be kept in cages at home or at private zoos without a licence from the Central Zoo Authority. "This happened at around 4.10 am on Friday under the jurisdiction of the Gongra Border Outpost in Nadia district of West Bengal. We were flabbergasted on opening the crate and finding four beautiful eagles stuffed inside. The birds have been handed over to forest department officials in Krishnanagar. Our troops are committed to prevent any sort of wildlife trafficking from across the border," a senior BSF official of the South Bengal Frontier said. A well-known writer and journalist had noted how he had spotted a large animal in an alley next to a 'Babu's' large mansion in north Kolkata sometime in the early 1970s. The writer was young at that time and had approached the animal that snarled. Even in the dim light, he could make out that it was a leopard. Fortunately, it was being tended by two of the Babu's servants on its nocturnal round around the compound. A few years ago, a lion cub was seized by forest department officials from an SUV near Kolkata. The cub had apparently been smuggled from across the Indo-Bangladesh border and was on its way to a private zoo. More recently, a number of kangaroos were rescued next to a highway in north Bengal. These had apparently been bred at a private zoo in Mizoram and was being sent to another one in Madhya Pradesh. There is no private zoo in Myanmar at the location mentioned and the animals were apparently smuggled across the border from Myanmar. While Myanmar may not have facilities to breed such animals, it does offer a conduit for wildlife trafficking from other countries to India. It is the same with Bangladesh. A source in the forest department said that illegal wildlife trade is big business. "It is probably as big as the narcotics trade. There are rich people in India who are ready to pay a King's ransom for animals, even lions and leopards that they can keep as pets to satiate their ego. Many of them have enclosures next to their luxurious mansions. Some have small zoos on their roofs. This has to be stopped if we are to stop the illegal trade in wildlife," he said. /IANS