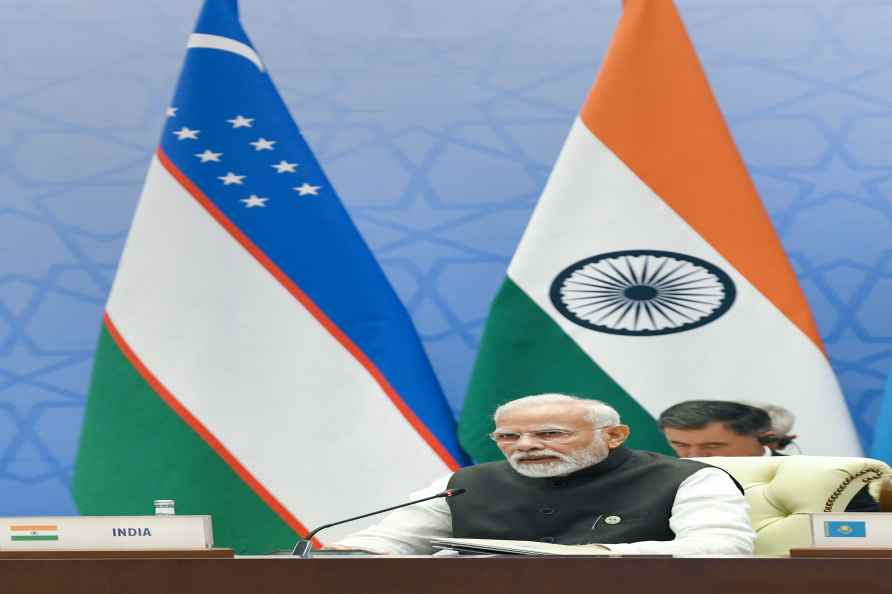 [**EDS: HANDOUT PHOTO MADE AVAILABLE FROM PIB ON FRIDAY, SEPT. 16, 2022** Samarkand: Prime Minister Narendra Modi attends the 22nd Meeting of Council of Heads of State of the Shanghai Cooperation Organization (SCO), in Samarkand, Uzbekistan, Friday, Sept. 16, 2022. ( /PTI] Samarkand, Sep 16 : Prime Minister Narendra Modi on Friday attended the Shanghai Cooperation Organisation (SCO), which is the first in-person summit being held in two years in the historic Uzbek city here. Before the deliberations, Prime Minister Narendra Modi posed for a photograph with the SCO leaders -- Russian President Vladimir Putin, Chinese President Xi Jinping, Pakistan PM Shehbaz Sharif and other leaders. Modi also met Shavkat Mirziyoyev, the President of Uzbekistan. The Prime Minister's Office on Friday tweeted the pictures, "PM @narendramodi at the SCO Summit in Samarkand, Uzbekistan." Ministry of External Affairs spokesperson Arindam Bagch tweeted: "Together for the region! PM @narendramodi joins the leaders of SCO Member States for discussions on topical, regional and international issues, including regional peace and security, trade and connectivity, culture and tourism." The Prime Minister is participating in the 22nd Meeting of the Council of Heads of State of the Shanghai Cooperation Organization (SCO) and will hold bilateral meetings with some other leaders attending the Summit. The regional multilateral organisation was set up in 2001 with Russia, China, Kazakhstan, Kyrgyzstan, Tajikistan, and Uzbekistan as members, while India and Pakistan became full members in 2017. The Council of the SCO Heads of State is the highest decision-making body of the organisation and meets for an annual summit that is hosted by a member state of the SCO. Prime Minister Modi has been leading the Indian delegation to the SCO Summit every year, since India became its full member in 2017. During the last two summits in 2020 and 2021, he participated in the virtual format. /IANS

Valsad: 100-year-old Kamuben Lalabhai Patel shows her finger marked with indelible ink after casting her vote during the first phase of Gujarat Assembly elections, at Umargam in Valsad district, Thurs […]