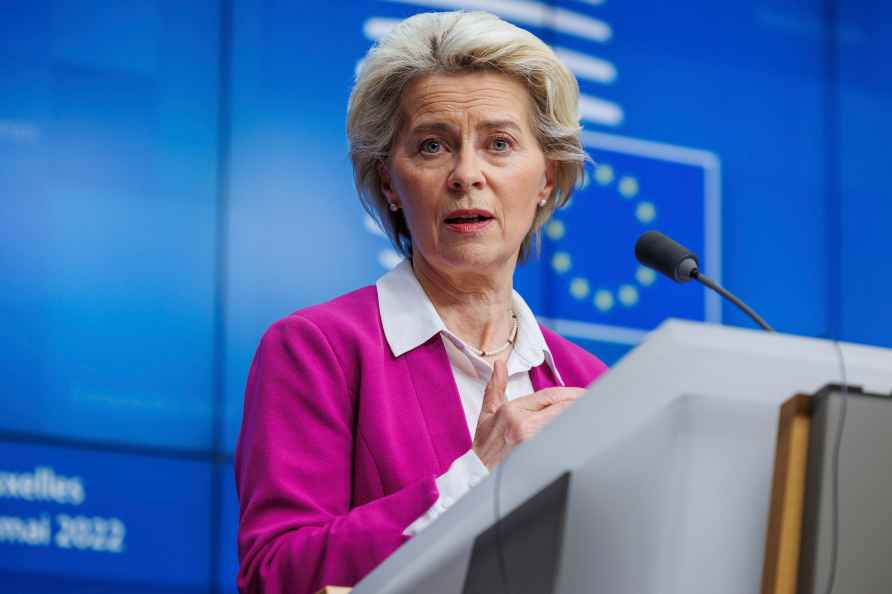 Brussels, Sep 14 : The European Commission President, Ursula von der Leyen, has insisted "Putin will fail and Europe will prevail", as she vowed to press on with Ukraines EU integration, media reports said. Addressing the European Parliament in Strasbourg, France, Leyen issued a rallying call intended to unite member states grappling with an energy crisis as winter draws near, The Guardian reported. Leyen described the Russian invasion as not only a war on Ukraine, but "a war on our economy, a war on our values and a war on our future". Dressed in blue and yellow colours of Ukraine's national flag, the Commission President announced she would visit Kiev later on Wednesday and planned detailed discussions with Ukraine President Volodymyr Zelenskiy on ensuring Ukraine's "seamless access to the single market". Ukraine's first lady, Olenka Zelenska, was among the audience in Strasbourg and was given a standing ovation by the MEPs. Leyen promised to work with Zelenska on the reconstruction of Ukrainian schools and pledged Â?100m (Â£87m) in EU funds. An estimated 70 schools have been damaged or totally destroyed by Russia. The European Commission chief, who has already visited Kiev twice since the outbreak of war, also said the EU would stay the course with its sanctions on Russia. "The sanctions are here to stay. This is the time for us to show resolve not appeasement," she said. Leyem said the EU's economic restrictions on the Russian economy were working, and offered some eyecatching claims. "The Russian military is taking chips from dishwashers and refrigerators to fix their military hardware, because they ran out of semiconductors," she said, The Guardian reported. /IANS

Canada to strengthen visa processing capacity in Delhi, Chandigarh
New Delhi, Nov 28 : As a Pacific nation, Canada constituted an ambitious plan, which initially provides for an investment of nearly $2.3 billion over