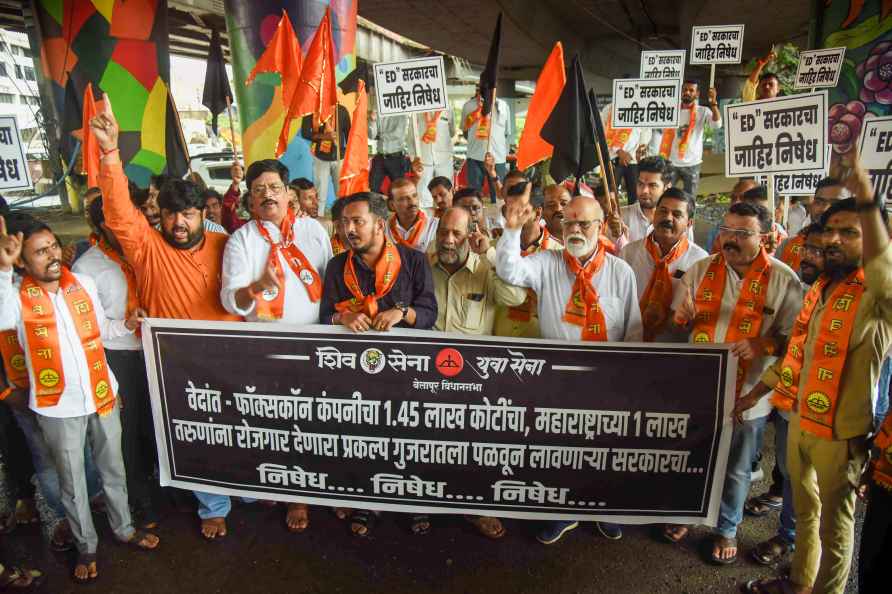 [Navi Mumbai: Shiv Sena (Uddhav Thackeray) workers raise slogan against Maharashtra State Government over shifting of Vedanta-Foxconn project to neighboring state of Gujarat, at Turbhe in Navi Mumbai, Thursday, Sept. 15, 2022. ( /PTI] Mumbai/Pune, Sep 15 : As the row over the Vedanta Group-Foxconn project shifts to Gujarat, Nationalist Congress Party MP Supriya Sule sharply chided Chief Minister Eknath Shinde for his utterances amid demands for a judicial probe by a retired judge, enquiry into the sequence of events that led to the loss and agitations by various parties, here on Thursday. Participating in a 'lollipop protest' in Pune, Sule castigated the CM for taking the name of Prime Minister Narendra Modi who has reportedly assured that 'even bigger projects' will be given to Maharashtra in future. "Stop this childish behaviour... Get serious now. Stop politicising on this and convene an all-party meeting in the interest of the people of the state to discuss this issue. If needed, take an all-party delegation to the PM to ensure that this project which was won by Maharashtra 'on merits' is restored to us," Sule demanded. Scores of NCP workers were detained at a noisy demonstration in Mumbai, and in Pune, raising slogans against Shinde-Fadnavis for the state losing the prestigious Vedanta-Foxconn project to Gujarat. Slamming the Maha Vikas Aghadi allies Shiv Sena-NCP-Congress for their aggressive attacks on Shinde-Deputy CM Devendra Fadnavis, Mumbai Bharatiya Janata Party demanded that a probe panel headed by retired judge should be appointed to 'unravel the truth'. The Shiv Sena's Yuva Sena and other groups organised a signature campaign and demonstrations against the government blaming it for the Vedanta-Foxconn mega-project of Rs 2.06 lakh crore opting for Gujarat after 90 per cent of the deal was finalised with Maharashtra. Congress General Secretary Sachin Sawant warned that if Vedanta-Foxconn moves to the adjoining state, "it will be a loss of not only Maharashtra but also India" as projects don't thrive in Dholera (Gujarat), with many withdrawing from there. Remaining on the backfoot after Maharashtra lost out on the Vedanta-Foxconn project and even a Bulk Drugs Park, worried leaders of Shinde Group and BJP sought to pass the blame onto the erstwhile MVA's former CM Uddhav Thackeray for the debacles. On Wednesday, Shinde and Industry Minister Uday Samant claimed that the PM had reportedly assured that bigger projects would be given to the state, prompting the MVA allies to hit the government with the 'lollipop' tirade. /IANS