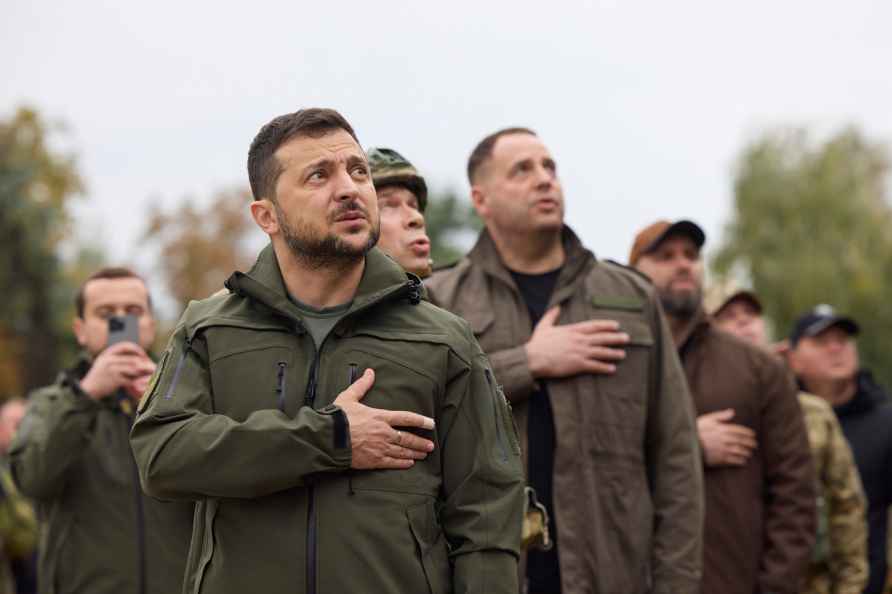 [In this photo provided by the Ukrainian Presidential Press Office, Ukrainian President Volodymyr Zelenskyy, center, sings Ukrainian national anthem during his visit in Izium, Kharkiv region, Ukraine, Wednesday, Sept. 14, 2022. Ukrainian troops piled pressure on retreating Russian forces Tuesday, pressing deeper into occupied territory and sending more Kremlin troops fleeing ahead of the counteroffensive that has inflicted a stunning blow on Moscow's military prestige. /PTI] London, Sep 14 : Vladimir Putin has no good options for how to react after a lightning offensive by Ukraine inflicted Russia's most serious and rapid military defeat on the battlefield since the Second World War, a UK military expert said, Daily Mail reported. Justin Bronk, a research fellow at London's Royal United Services Institute, has analysed the latest situation in an article as Ukrainian troops continued to pile pressure on retreating Russian forces. Ukraine is now seeking to hold onto its sudden momentum that has produced major territorial gains, with Russian troops surrendering en masse amid hopes that a turning point in the war has finally been reached. The counter-offensive left the Kremlin struggling for a response to its largest military defeat in Ukraine since Russia pulled back from areas near Kyiv after a botched attempt to capture the capital early in the invasion, Daily Mail reported. It comes as Russia's state media war correspondent Alexander Sladkov accidentally revealed the scale of their losses in Ukraine, telling the Kremlin-run Rossiya 1 news channel that a 'huge number of people' have died, Bronk said. Bronk said Ukraine has 'baited Russia into accepting an attritional battle in a very militarily disadvantageous position', adding that Russia 'will be hard pressed simply to avoid any more disasters before winter'. The expert said it had been 'one of the most successful counter-offensives we've seen in modern history in terms of territory gained over a given speed of advance,' Daily Mail reported. /IANS