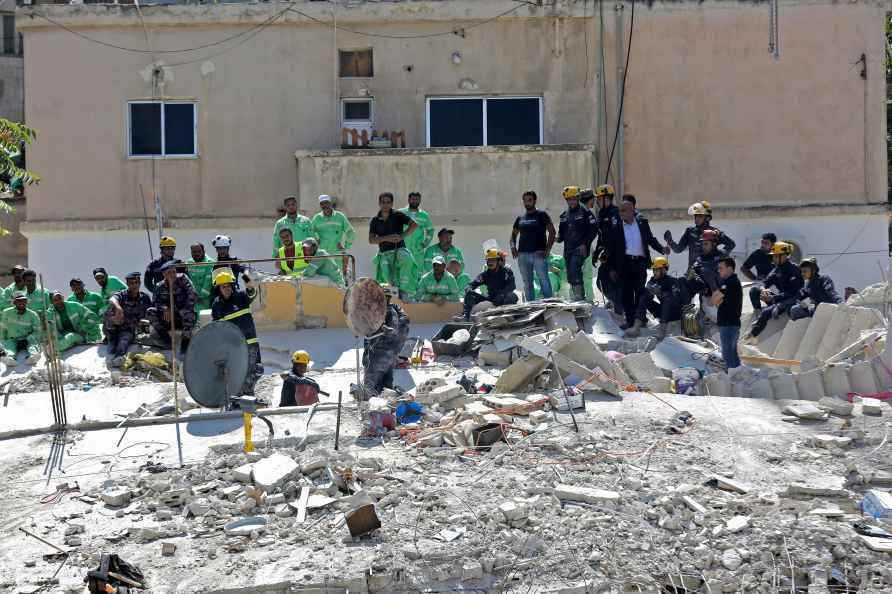 [Jordanian Civil Defense rescue teams conduct a search operation for residents of a four-story residential building that collapsed on Tuesday, killing several people and wounding others, in the Jordanian capital of Amman, Wednesday Sept. 14, 2022. Jordanian teams on Wednesday rescued one person alive and worked to save others from the rubble of the collapsed building, officials said. State media said at least five people have been killed and at least 10 others remain missing. /PTI] Chandigarh, Sep 14 : Amid allegations of BJP attempting to bring down the Aam Aadmi Party (AAP) government in Punjab, the AAP on Wednesday said it has filed a formal complaint along with all proofs to Director General of Punjab Gaurav Yadav for a fair probe into threats and money offers to its legislators. It lashed out at the saffron party, calling it a "serial killer" of democracy and condemned "Operation Lotus" for the "dubious manner" in which elected governments in the country are being brought down. State Finance Minister Harpal Singh Cheema told media that the BJP has "murdered democracy" by toppling elected governments in various states after "using" central investigation agencies and through money lures. It tried the same in Punjab, but the staunch soldiers of AAP foiled the BJP's "nefarious agenda". He alleged BJP agents and workers from Delhi and Punjab have "tried to break" 35 MLAs of AAP to topple the government in Punjab. Cheema said a complaint against BJP leaders and agents has been submitted before the DGP for "offering Rs 25 crore each to at least 10 MLAs in the state and also giving life threat to Jalandhar West MLA Sheetal Angural and others for exposing their wicked agendas before the public". Stating that the BJP is baffled with "growing popularity" of AAP and its supremo Arvind Kejriwal, he said the BJP is now afraid of Kejriwal and is trying to stop him by any means. "The work of horse-trading adopted by the BJP has been going on in different states of the country. The BJP under its Operation Lotus had earlier changed governments in Karnataka, Madhya Pradesh, Maharashtra and Arunachal Pradesh. "In latest target under Operation Lotus, eight MLAs of Congress have shifted to the BJP in Goa today. It is a testament that BJP is killing democracy and forming their government in non-BJP ruled states by breaking MLAs with help of the CBI and the ED," Cheema said. He said the BJP will never succeed in its "wicked" plans in Punjab even if they offer Rs 2,200 crore because the loyal soldiers of AAP under the leadership of Kejriwal and Chief Minister Bhagwant Mann are standing like a rock. /IANS