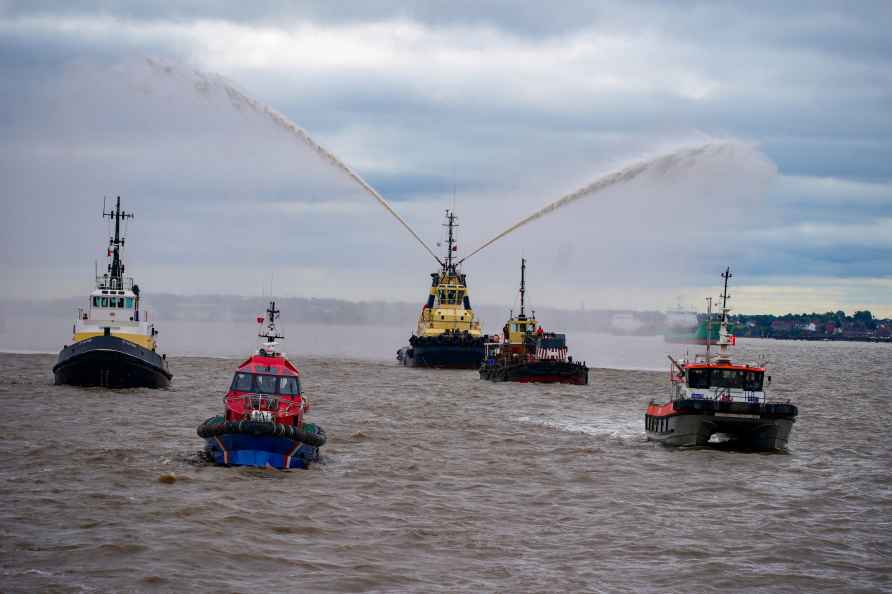 [River tugs perform Fleur De Lis, the spraying of water from their fire cannons, as vessels gather on the River Mersey in Liverpool, England, as a maritime tribute to Queen Elizabeth II, who will lie in state at Westminster Hall, London, Wednesday Sept. 14, 2022. The Queen will lie in state in Westminster Hall for four full days before her funeral on Monday Sept. 19. /PTI] New Delhi, Sep 14 : President Droupadi Murmu will represent India at the state funeral of Queen Elizabeth II in London on September 19. Murmu will be visiting London from September 17 to 19 to offer condolences on behalf of the Government of India. Queen Elizabeth, the former head of state of the UK and Head of the Commonwealth of Nations, passed away on September 8. President Droupadi Murmu, Vice President Jagdeep Dhankhar and Prime Minister Narendra Modi expressed condolences at the demise of Queen Elizabeth II. External Affairs Minister S. Jaishankar visited the British High Commission in New Delhi on September 12 to convey India's condolences. India also observed a day of national mourning on Sunday (September 11). Prime Minister Narendra Modi had tweeted, "Her Majesty Queen Elizabeth II will be remembered as a stalwart of our times. She provided inspiring leadership to her nation and people. She personified dignity and decency in public life. Pained by her demise. My thoughts are with her family and people of UK in this sad hour." "In the 70 years of reign of Her Majesty Queen Elizabeth II, India-UK ties have evolved, flourished and strengthened immensely. She played an important role in the welfare of millions of people around the world as Head of the Commonwealth," the Ministry of External Affairs said in a statement. /IANS