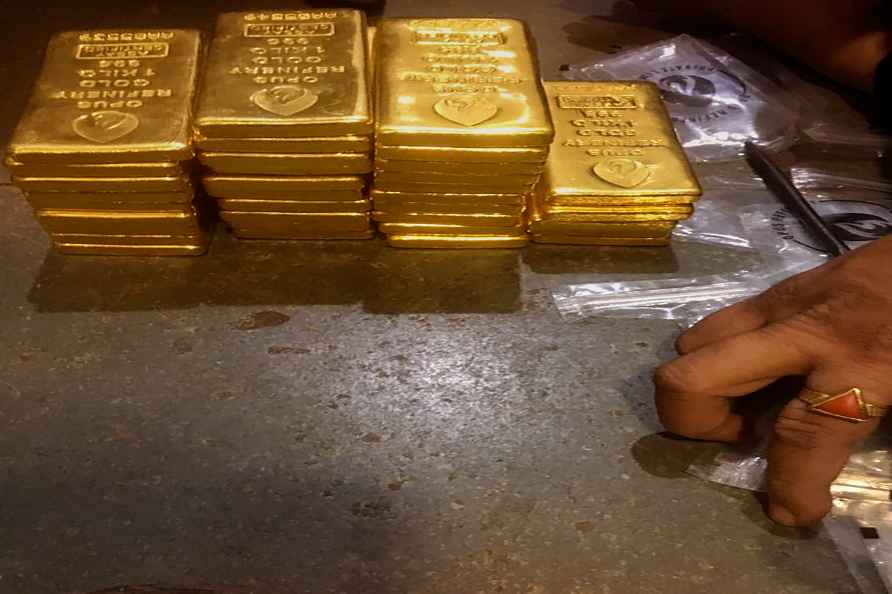 [**EDS: TWITTER IMAGE POSTED BY @dir_ed ON WEDNESDAY, SEPT. 14, 2022** New Delhi: Enforcement Directorate officials display gold bars and silver, seized after searching premises of Raksha Bullion and Classic Marbles in connection with a case against the company 'Parekh Aluminex Ltd' as part of a money laundering probe linked to an alleged bank loan fraud. ( /PTI] New Delhi, Sep 14 : The Enforcement Directorate (ED) on Wednesday concluded search operation at four premises belonging to Raksha Bullion and Classic Marbles. The searches were conducted in connection with the money laundering probe in case of Parekh Aluminex limited. The ED had registered money laundering case against Parekh Aluminex Limited on March 8, 2018. An official said that the company duped banks and took loans to the tune of Rs 2296.58 crore. The money was thereafter siphoned off by layering through various companies. The money was routed to various accounts in context of providing unsecured loans and investments. The same was not the purpose of taking the loans and there were no agreements in place for such transactions. During the search action, keys to private lockers were found in the premises of Raksha Bullion. On searching the private lockers, it was found that the locker operation was being done without following the proper norms. "No KYC was followed and there was no CCTV camera installed at the premise. There was no in and out register. Searching the locker premise revealed that there were 761 lockers of which three belonged to Raksha Bullion. On operating the lockers, 91.5 kgs of gold and 152 kg of silver was found in two lockers and the same was seized. An additional 188 kgs of silver was also seized from the premises of Raksha Bullion," said the official. The ED said total value of seized items is Rs 47.76 crore. "Earlier amount of Rs 46.97 crore and Rs 158.26 crore were attached by the ED in this case on different dates," said the ED official. Further investigation in the matter is on. /IANS