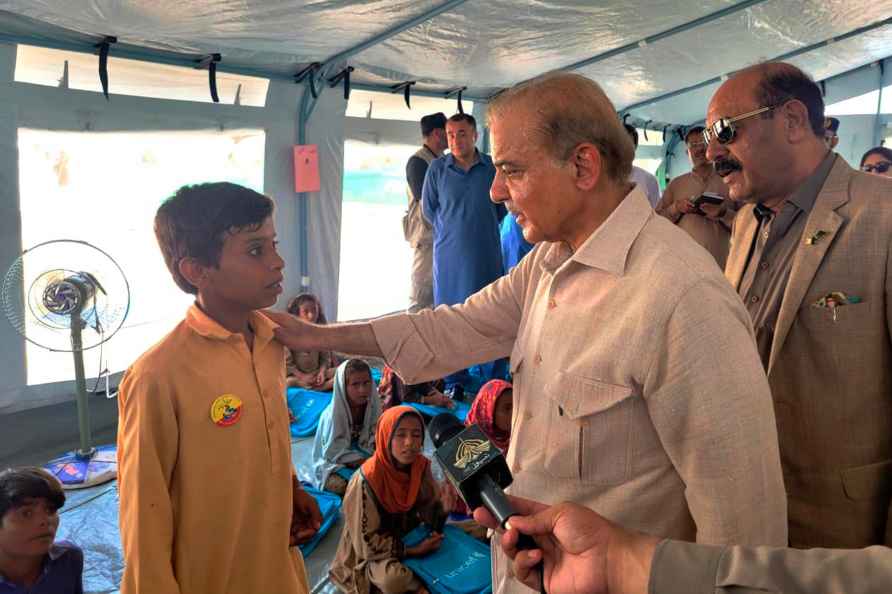 [In this handout photo released by Press Information Department, Prime Minister Shahbaz Sharif, second right, talks a student at a makeshift school inside a tent in the flood-hit area of Suhbatpur in Baluchistan, Pakistan. Sharif on Wednesday promised the country's millions of homeless people that the government will ensure they are paid to rebuild their homes and return to their lives after the country's worst-ever floods. ( /PTI] Chandigarh, Sep 14 : A day after raking up allegations against the BJP's Central government for attempting to destabilise the AAP government in Punjab by offering hefty sums to its legislators, state Finance Minister Harpal Singh Cheema on Wednesday revealed the names of 11 legislators who were tried to be 'allured'. The legislators were Dinesh Chadha, Raman Arora, Budh Ram, Kulwant Pandori, Narinder Kaur Bharaj, Rajnish Dahiya, Rupinder Singh Happy, Sheetal Angural, Manjit Singh Bilaspur, Labh Singh Ugoke and Baljinder Kaur. However, the BJP dismissed the allegation by saying AAP was attempting to divert public attention from its governance failures. Cheema alleged that even legislator Angural was given death threats. "He's not the only one. Some of the other MLAs were also given death threats by the agents of the BJP, he alleged. Thirty-five legislators have been approached and 10 of these have been issued death threats, he said. "I am taking these MLAs to meet the DGP, requesting him to investigate the matter. We are going to request him to file an FIR. We are submitting all proof against them, the minister added. Addressing the media here, Cheema on Tuesday said under 'Operation Lotus' many leaders and agents of the BJP from Delhi and Punjab have approached at least 10 AAP MLAs on phone in the past seven days and offered Rs 25 crore to each to quit AAP and join the BJP. He said they were offering to arrange meetings of AAP MLAs with Babu-ji (a top BJP leader) and also promised them Cabinet ministerial ranks after the BJP form the government in the state. Lambasting the Modi government, Cheema said the BJP "is working as a serial killer in Punjab, and anti-national powers have joined forces to overthrow the AAP government in Punjab as they are unable to digest the dynamic functioning of Chief Minister Bhagwant Mann-led government in the state." "After using central investigation agencies against AAP leaders and offering money to MLAs in Delhi, now the BJP is attempting to buy MLAs in Punjab," Cheema said. He said the BJP "is a serial killer which is bringing down the governments in every state one by one by coercing opposition party leaders with agencies and money. The next target in this murder of democracy under 'Operation Lotus' is Punjab." "Wherever the BJP loses, these people form their government by breaking MLAs with help of the CBI, the ED and money. They did it in Goa, Karnataka, Madhya Pradesh, Maharashtra and Arunachal Pradesh. Now, they are doing it in Punjab," Cheema said. /IANS