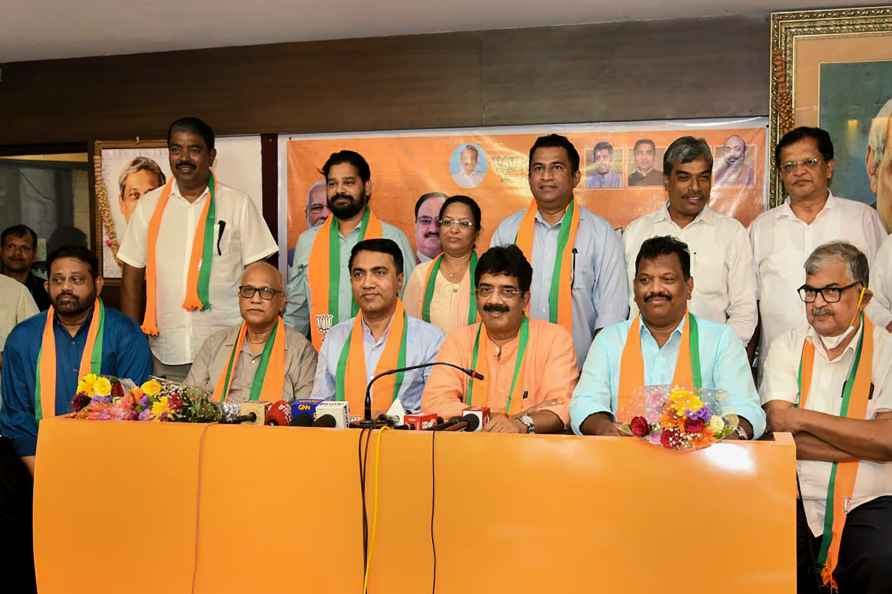 [Panaji: Goa Chief Minister Pramod Sawant and BJP Goa President Sadanand Shet Tanavade with eight Congress MLAs who joined the party, in Panaji, Wednesday, Sept. 14, 2022. ( /PTI] Panaji, Sep 14 : A Congress leader in Goa on Wednesday confirmed that eight party MLAs have passed a resolution to switch to the state's ruling BJP. Confirming the development to IANS, party MLA and Deputy Leader of the Congress Legislative Party, Sankalp Amonkar said: "Yes we are merging with the BJP, a resolution in this regard has been taken." Besides Amonkar, the seven others are former Chief Minister Digambar Kamat, Michael Lobo, Delilah Lobo, Kedar Naik, Rajesh Faldesai, Aleixo Sequeira and Rudolf Fernandes. Sources said that following a meeting, Chief Minister Pramod Sawant met the eight MLAs in the Assembly complex, after which they carried out further formalities to switch. Congress has 11 MLAs in the 40-member Goa Assembly, while the strength of the BJP has now increased to 28. On July 10, the Congress had removed Lobo as the Leader of Opposition alleging he was one who hatched a conspiracy, along with Kamat, by hobnobbing the BJP to split Congress MLAs. It was their first attempt to join the BJP, however it was foiled after early intervention of senior party leaders. During Ganesh Chaturthi, these MLAs had again tried to join BJP, but they couldn't manage numbers. On July 10, 2019, during the last term of BJP government, 10 MLAs of Congress along with Leader of Opposition Chandrakant Kavalekar had switched to the BJP. However Kavalekar and other six politicians lost the Assembly election held in February this year. /IANS