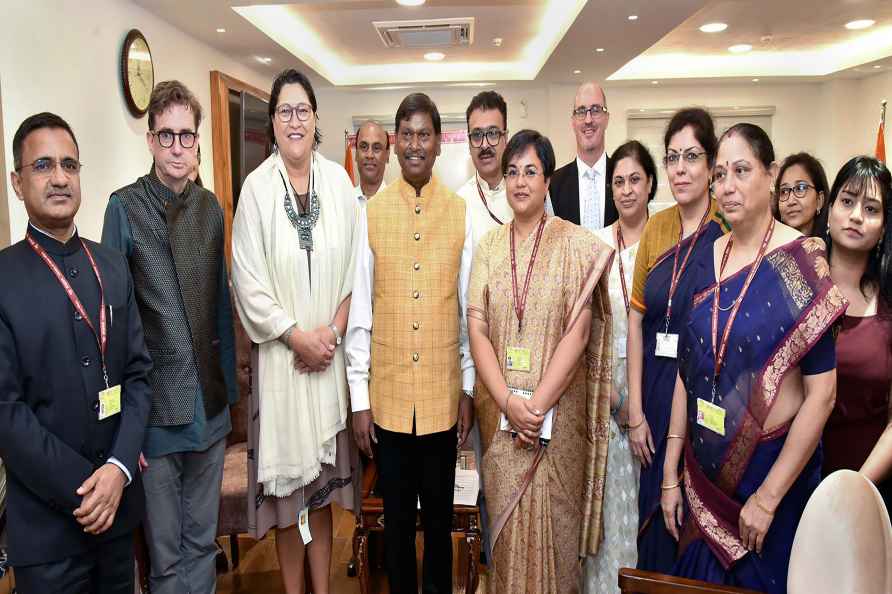 [**EDS: HANDOUT PHOTO MADE AVAILABLE FROM PIB ON TUESDAY, SEPT. 13, 2022** New Delhi: Union Minister for Tribal Affairs Arjun Munda in a meeting with a delegation led by the Minister for Food Safety, Customs, Veterans & Associate Minister for Agriculture (Animal Welfare), and Statistics of New Zealand Meka Whaitiri, in New Delhi. ( /PTI] By Nirendra Dev New Delhi, Sep 13 : Public pressure and general mood in the state seemed to have influenced the thought process of Nagaland legislators and ministers. They now admit that it would be difficult for political leaders irrespective of party affiliation to face the electorate without a solution to the Naga political problem. Five years ago in the 2018 Assembly elections, the 'Election for Solution' slogan was raised chiefly by the BJP and also by the Chief Minister Neiphiu Rio-led NDPP, which fought the polls together. At the crucial meeting between Union Home Minister Amit Shah and the Naga delegation -- an 11-member core committee led by Rio on Monday -- reportedly maintained "we cannot face elections and the people of Nagaland without solution". This plea was countered by the Centre: "We did not delay... when did we delay? The government of India is ready to sign the peace pact even today." This essentially has brought the ball into the court of NSCN-IM, especially its powerful general secretary Thuingeleng Muivah, who had in 2019 raised the twin issues of flag and a separate constitution. The Centre has rejected the demands outright. At Monday's meeting also, the Naga delegation was told that "what cannot be given, cannot be given today, tomorrow or day after". The Naga leaders have been advised to meet NSCN-IM leaders at the earliest and it was also underlined that everyone involved in the process should be "pragmatic". The development especially the realisation among the 11-member panel including from BJP that it would be difficult to face the voters without a Solution to the 7-decade old Naga insurgency to a large extent is seen as an 'achievement' for the civil society. On August 5, the newly-floated Naga People's Action Committee (NPAC) had organised a successful rally in Dimapur wherein all major speakers and community leaders stressed on the need for an early solution. Individually also a few former civil servants such as a former IAS Khekiye K Sema deserve mention for pushing the line for an early Solution. Chief Minister Rio tweeted about the Monday deliberations and wrote: "Once again, we urged the GoI to expedite the protracted negotiations on the issue and bring about an early and honourable solution." The Centre has put the peace talks on the fast track once again after the stalled parleys with the NSCN-IM (over the issues of flag and constitution) were revived last month from Shillong. Last week, the Naga delegation led by Chief Minister Rio met new peace emissary A.K. Mishra in Delhi. A new set of Formulation Papers has been given by the centre to the NSCN-IM with a "set of old and new offers". Obviously, the focus is now on "convincing" the NSCN-IM to ink the final peace pact while at the same time, the NNPG for its part is already keen to sign an agreement and herald a new era of lasting peace and development for Nagas. The Nagaland Ministers including a few members of the Core Committee would be holding a "closed door" meeting with the NSCN-IM delegation "as early as possible". According to sources in Delhi, the mood in general is to ink a peace agreement and herald a new era of peace and tranquility. The delegation led by Rio reminded Amit Shah of the BJP's 'Election for Solution' slogan in the 2018 state elections and urged him to work for a conclusion to the Naga issue ahead of the ensuing polls. They also said the Solution should be "honourable, acceptable and inclusive". The Naga peace talks had begun during the stint of I K Gujral as Prime Minister in 1997 and among others former Nagaland Chief Minister S.C. Jamir, also a former Governor of Gujarat, has said that "all issues have been discussed and finalised since 2019 and now we are only waiting for an agreement and final solution pact". /IANS