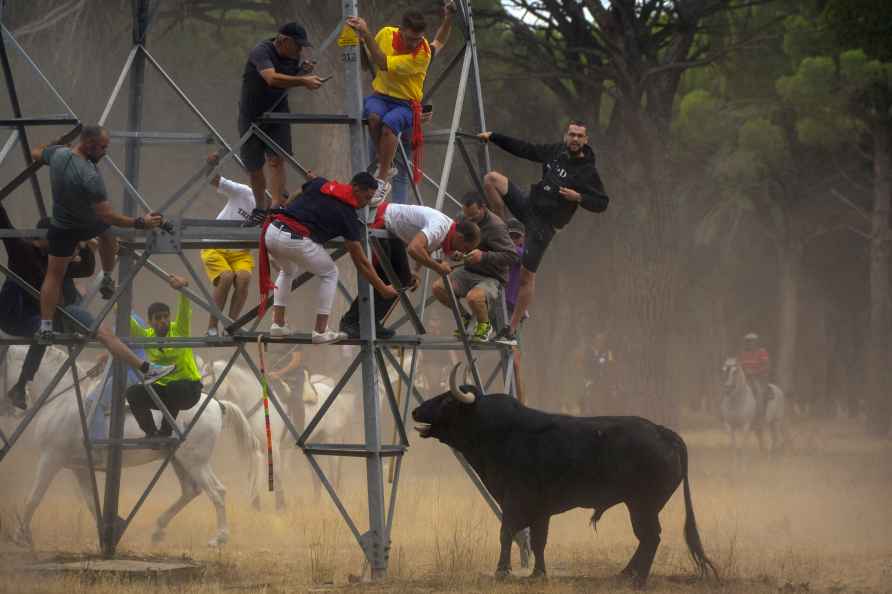 [Men escape a bull during the 'Toro de la Vega' bull festival in Tordesillas, near Valladolid, Spain, Tuesday, Sept. 13, 2022. Hundreds of people have taken part in a centuries-old Spanish bull-chasing festival, but under orders once again that the animal should not be harmed with spears or darts. The Toro de La Vega festival in the northcentral town of Tordesillas traditionally saw the bull speared to death by revelers who chased it from the town to outlying fields on horseback and on foot. /PTI] Los Angeles, Sep 13 : Immediately after news of French New Wave icon Jean-Luc Godard's death broke on Tuesday (September 13), tributes started pouring in from world leaders, fellow filmmakers, artistes and cinephiles around the world, reports 'Variety'. The first off the block was French President Emmanuel Macron, who described Godard as "the most iconoclastic of New Wave filmmakers, who had invented a resolutely modern, intensely free art. We are losing a national treasure, a look of genius." Godard was also celebrated by Edgar Wright, the writer-director of 'Last Night in Soho', who wrote on social media that Godard was "one of the most influential, iconoclastic filmmakers of them all." Wright added that "perhaps no other director inspired as many people to just pick up a camera and start shooting". Actor, comedian, director and writer Stephen Fry said he had watched Godard's debut film 'Breathless' for the "umpteenth time again" two weeks ago and found it as compelling as ever. "It still leaps off the screen like few movies," Fry tweeted. "That scene between them in the hotel: how many other directors could have managed that in so small a space and made it so captivating?" Oscar-winning Mexican director and author Guillermo Del Toro also paid homage to Godard on social media and kept retweeting tributes from others, one of them being from the French cinephile Philippe Rouyer, who wrote: "A last salute to #JeanLucGodard immense filmmaker who has not stopped rethinking his art since 'Breathless' (1960). 'Le Contempt' and 'Pierrot le fou' are masterpieces. But until his last strokes of brilliance, all his films question the making and the impact of images." The British Film Institute (BFI) called Godard a "giant of cinema who ripped up the rule book." A statement issued by it read: "From 'Breathless' onwards, he tested the limits of the medium." BFI Chief Executive Ben Roberts said in a statement issued to 'Variety': "Jean-Luc Godard's death is a huge loss to cinema. The godfather of the French New Wave and one of the most influential and innovative filmmakers of the last century, his work has resonated with generations of film lovers around the world." The Cannes Film Festival released a retrospective of his career highlights on Twitter. "Since his first appearance at the Festival in 'Cleo de 5 a 7' in 1962, 21 films by Jean-Luc Godard have been screened at Cannes," the festival shared. Cameron Bailey, chief of the ongoing Toronto International Film Festival, tweeted: "Jean-Luc Godard might have despised posthumous praise but here we are. His staggering body of work over seven decades showed him to be a rare, true genius in cinema. It was playful and punishing. It challenged every viewer, and rewarded the persistent." He added: "Most of all, Godard was merciless in his pursuit of what (and how) images mean. For his every confrontation that expanded our art form, we will be forever in his debt." The news of Godard's passing was first reported in the French newspaper 'Liberation' on Tuesday morning and later confirmed by the auteur's family in a statement which read: "There will not be any official ceremony. Jean-Luc Godard died peacefully in his home surrounded by his close ones. He will be incinerated." /IANS