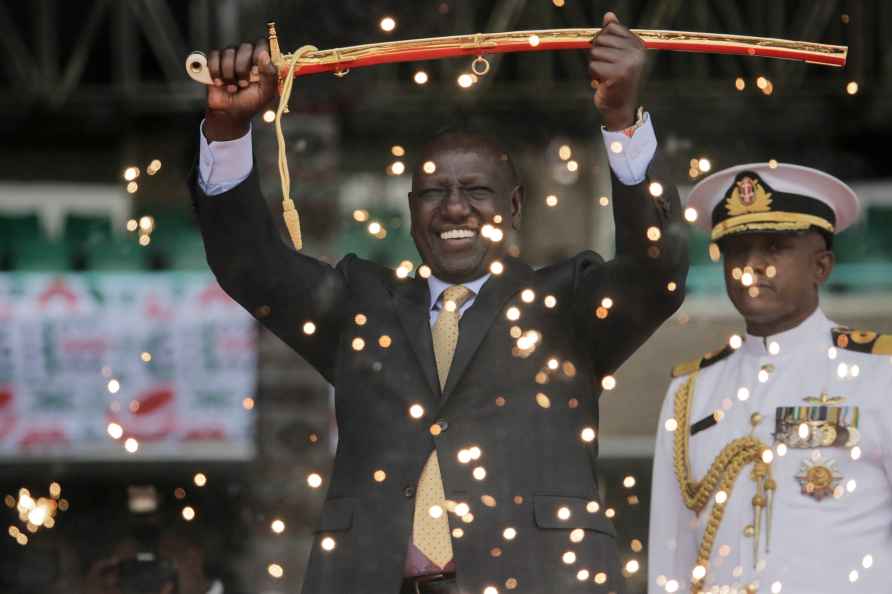 [Kenya's new president William Ruto, seen behind fountain fireworks, holds up a ceremonial sword as he is sworn in to office at a ceremony held at Kasarani stadium in Nairobi, Kenya Tuesday, Sept. 13, 2022. William Ruto was sworn in as Kenya's president on Tuesday after narrowly winning the Aug. 9 election and after the Supreme Court last week rejected a challenge to the official results by losing candidate Raila Odinga. ( /PTI] Nairobi, Sep 13 : Kenya's outgoing President Uhuru Kenyatta held a meeting with his successor William Ruto, reiterating his commitment to the peaceful transfer of power on Tuesday. Kenyatta, who gave a televised farewell address to the nation after meeting Ruto at the State House here, Nairobi, said that he will oversee a peaceful transition of powe, in a bid to reaffirm Kenya's democratic ethos, reports Xinhua news agency. Kenyatta congratulated his Deputy William Ruto for clinching the presidency during the country's hotly contested August 9 polls, pledging support to the incoming administration as it embarks on serving all citizens fairly. "On my part as the Head of State, I hand over leadership of a nation that has undergone a consequential transformation over the last decade in every aspect of our national life," the outgoing leader said. On Tuesday, he will hand over instruments of power that includes a ceremonial sword and a copy of the constitution to Ruto, to signify a change of guard. In particular, Kenyatta noted that under his leadership, the country became Africa's sixth largest economy, up from 12th, amid enhanced trade with neighbours and the creation of a conducive regulatory environment to attract investments. He added that the digital economy flourished during his decade-long reign while the construction of 11,500 km of new tarmac road boosted connectivity and ease of doing business. An additional 6.3 million households, up from 2.3 million in 2013 have been connected to electricity, said Kenyatta, adding that the country had achieved a 100 percent transition from primary to secondary education under his stewardship. The country's forest cover increased from 6.9 per cent in 2013 to 8.8 per cent in 2022 even as poaching of iconic wildlife species declined considerably thanks to enhanced vigilance, said Kenyatta. He stressed that Kenya had the potential to become Africa's economic powerhouse, and a haven of stability and peace once the incoming fifth president builds on the legacy of his four predecessors. /IANS