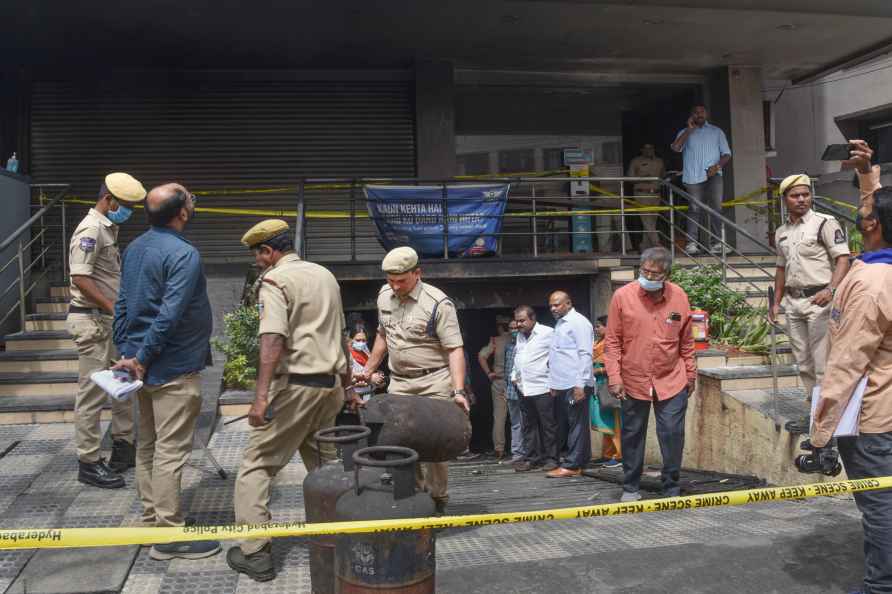 [Secunderabad: Hyderabad Police and members of their Clues team at the site after a fire broke out in an electric bike showroom on Monday, in Secundrabad, Tuesday, Sept. 13, 2022. The fire and smoke from the showroom engulfed a lodge situated above it, killing atleast eight people and injuring seven others, according to police. ( /PTI] Hyderabad, Sep 13 : Seven persons were killed and several others injured in a fire that broke out in an e-bike showroom, which spread to a lodge on the upper floor in Secunderabad, police said. The incident took place on Monday evening. Hyderabad Police Commissioner C. V. Anand said that seven deaths were reported. Those injured were shifted to the Gandhi and Yashoda hospitals. Two fire tenders were battling to control the fire but the cause of the fire was not known. Many e-bikes were gutted in the fire. According to eyewitnesses, heavy smoke engulfed Ruby lodge on the upper floor of the building after the fire broke out in the showroom on the ground floor. The Fire personnel managed to rescue nine persons. The incident sent panic in the building. Some of the guests reportedly jumped out of windows to save themselves. State Animal Husbandry Minister, T. Srinivas Yadav rushed to the spot and was monitoring the rescue and relief operation. /IANS