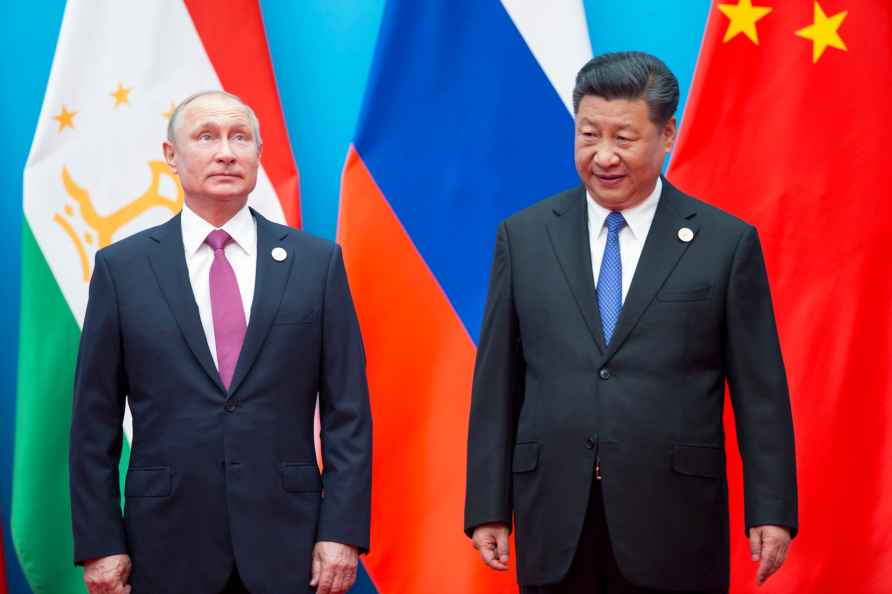 [FILE - Chinese President Xi Jinping, right, and Russian President Vladimir Putin pose for a photo at the Shanghai Cooperation Organization (SCO) Summit in Qingdao in eastern China's Shandong Province on June 10, 2018. President Xi Jinping is using his first trip abroad since the start of the pandemic to promote China's strategic ambitions at a summit with Putin and other leaders of a Central Asian security group. /PTI] By Arul Louis United Nations, Sep 13 : The new UN General Assembly President Csaba Korosi has said that he will ask the leaders of the process for Security Council reform to start negotiations on "concrete text," which would break one of the biggest logjams that has blocked the reforms. Speaking to reporters after formally assuming the presidency on Monday, he gave an assurance, "I'll do my best to forward this process." He said that he will appoint new co-facilitators for the reform negotiations and "ask them to be as impact-oriented as possible, to start negotiations on concrete proposals, concrete text". "It has been long overdue," he added. The reform process known formally as the Intergovernmental Negotiations (IGN) has been virtually blocked over decades from proceeding by a determined minority that has stopped it from adopting a negotiating text. A "concrete text" on which to base the negotiations and set its agenda is essential for the discussions to go forward and not be trapped in an endless circular debate. A negotiating text would also bring an element of formality to a process that has been conducted with total informality with no official records of proceedings. The group that is blocking the adoption of a negotiating text calls itself Uniting for Consensus and is led by Italy with Pakistan as one of the members. Korosi said that he has followed the reform process for 20 years and "heard all the arguments, all the attempts" (at reform). Laying out his commitment to reform to Council reform, he added, "The world has changed since 1945-1947. The world is very, very different. and the eight billion stakeholders in the United Nations are expecting this organisation to be able to be efficient on delivering (on its) core functions, including issues of peace and security." "That will need a larger, more representative and more responsive Security Council," he said. Permanent Representatives Martin Bille Hermann of Denmark and Alya Ahmed Saif Al-Thani of Qatar were the co-chairs or co-facilitators of the IGN appointed by Abdulla Shahid, who completed his term on Monday. Acknowledging the slow process of the reforms, Shahid said last week that "baby steps" towards reforms were taken during his presidency, "but in the process that has taken over 14 years, one should (not) have too much of an expectation". He added that through a process of what he termed "unformal" discussions to creatively try to sidestep formalities, "we were able to have a number of 'divergences' moved to the paper on convergence". This resulted in the informal document called the 'Elements Paper on Convergences and Divergences' that could serve as the basis of negotiations seeing some movement in identifying differences on Council reforms. This could form the basis of a formal "concrete text" for negotiations. (Arul Louis can be contacted at aru.l@ians.in and followed at @arulouis) /IANS