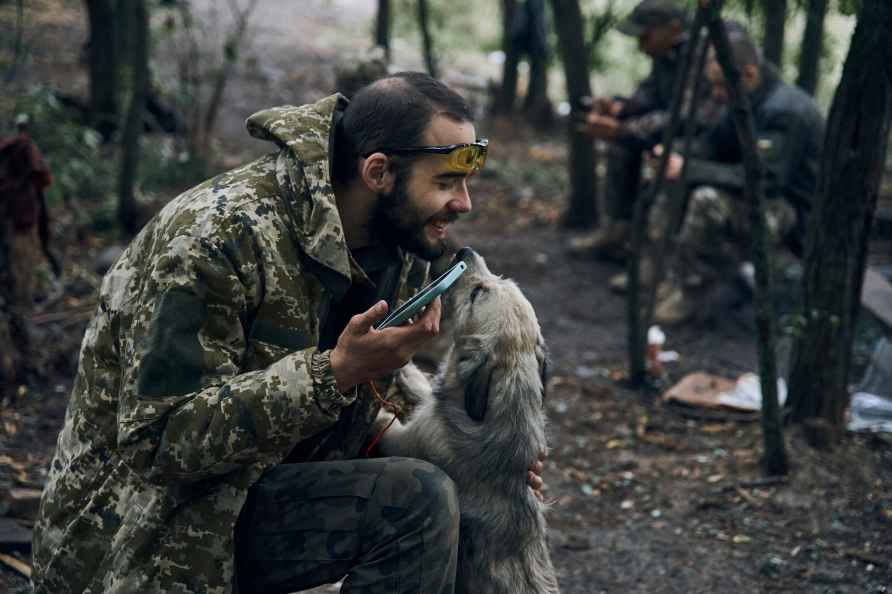 [A Ukrainian soldier plays with a dog as he has a rest in the freed territory in the Kharkiv region, Ukraine, Monday, Sept. 12, 2022. Ukrainian troops retook a wide swath of territory from Russia on Monday, pushing all the way back to the northeastern border in some places, and claimed to have captured many Russian soldiers as part of a lightning advance that forced Moscow to make a hasty retreat. /PTI] Kiev, Sep 13 : Since the beginning of this month, Ukrainian forces have liberated over 6,000 sq.km of the war-torn nation's territory from Russian forces, says President Volodymyr Zelensky. In his nightly video address, the President said on Monday: "Since the beginning of September, our warriors have liberated more than 6,000 sq.km of Ukrainian territory in the east and south. Our troops are continuing to advance." He went on to thank the 57th Separate Motorised Infantry Brigade, which has recovered from heavy fighting in the east and is advancing with great courage and confidence on the southern front; the 59th Separate Motorised Infantry Brigade, which has been advancing steadily despite the difficult, open terrain and the Russian artillery fire; the 128th Separate Mountain Assault Brigade, which has liberated several settlements and has effectively neutralised units of Russian troops, reports Ukrayinska Pravda. Zelensky also acknowledged Ukraine's anti-aircraft defence forces. He did not however, reveal which Ukrainian cities and villages had been liberated. The President's remarks come amid a counter-offensive launched by Ukraine to retake Russian occupied territories. On September 8, Zelensky said Ukrainian forces had retaken 1,000 sq.km, but by Sunday that stated figure had tripled to 3,000 sq.km. Russia has admitted losing key cities of Balakliya, Izyum and Kupiansk in the north-eastern Kharkiv region. Moscow describes its troop withdrawal from the region in recent days as a "regrouping" with the aim of focusing on the Luhansk and Donetsk regions in Ukraine's east. Although Ukrainian troops were advancing, Russia still controls about a fifth of Ukraine. /IANS