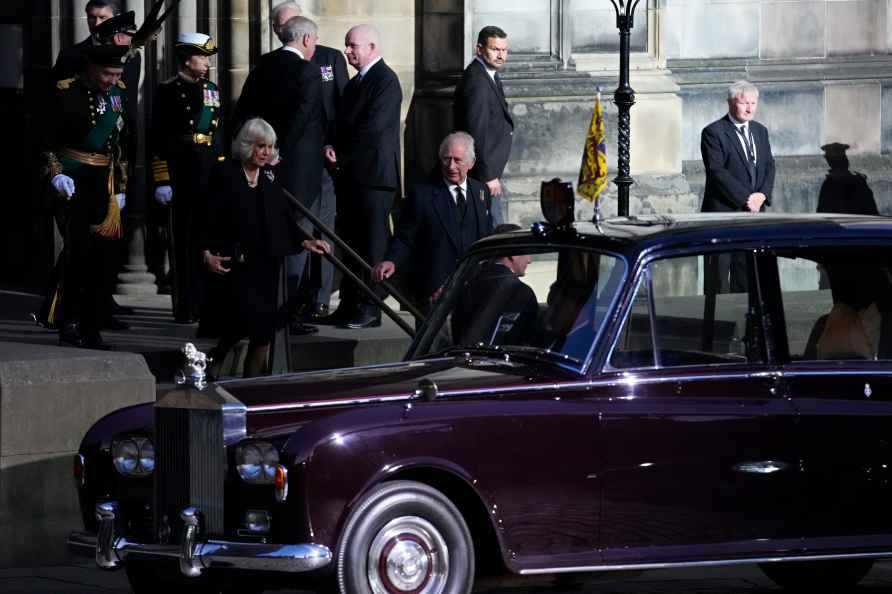 [King Charles III and Camilla, the Queen Consort, leave St Giles Cathedral where Queen Elizabeth's coffin arrived earlier in the day, in Edinburgh, Scotland, Monday, Sept. 12, 2022. The Queen's children are expected to stage a vigil around the Queen's coffin, known as the Vigil of the Princes, while it lies in there. /PTI] London, Sep 13 : Britain's King Charles III said he felt "the weight of history" and vowed to follow the example set by his late mother, Queen Elizabeth II, in his first address to the parliament. "As I stand before you today, I cannot help but feel the weight of history which surrounds us, and which reminds us of the vital parliamentary traditions, to which members of both Houses dedicate yourselves with such personal commitment for the betterment of us all," he told the House of Commons and House of Lords on Monday at a ceremony in Westminster Hall, the oldest building on the parliamentary estate. King Charles III ascended to the throne following the death of Britain's longest-reigning monarch Queen Elizabeth II, aged 96, on Thursday. He was formally proclaimed Britain's new monarch at a meeting of the Accession Council at St James's Palace on Saturday, Xinhua news agency reported. "While very young, her late Majesty pledged herself to serve her country and her people and to maintain the precious principles of constitutional government which lie at the heart of our nation. This vow she kept with unsurpassed devotion," he told the lawmakers and peers. "She set an example of selfless duty which, with God's help and your counsels, I am resolved faithfully to follow," he said. Charles III travelled to Edinburgh to lead a procession behind the Queen's coffin to St. Giles' Cathedral for a service of remembrance later on Monday. The Queen's state funeral will take place at Westminster Abbey on September 19, Buckingham Palace has announced. /IANS