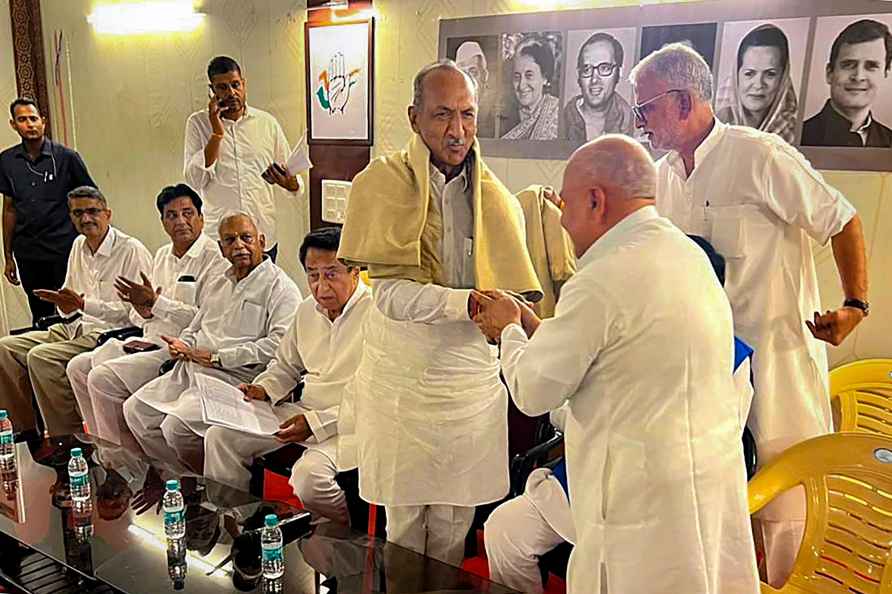 [Bhopal: Senior Congress leader and AICC in-charge for Madhya Pradesh Jai Prakash Aggarwal being greeted by Leader of the Opposition in the State Assembly Govind Singh, during Congress Legislature Party meeting at Madhya Pradesh Congress President Kamal Nath's residence in Bhopal, Monday, Sept. 12, 2022. ( /PTI] Bhopal, Sep 12 : The monsoon session of the Madhya Pradesh Assembly is scheduled to get underway on Tuesday with the Opposition gearing up to corner the ruling BJP on several issues, including corruption, unemployment, rising crime against women. According to officials, though the five-day session is scheduled to conclude on September 17, it might be trimmed by a day in view of Prime Minister Narendra Modi's visit to Kuno National Park. Meanwhile, Assembly Speaker Girish Gautam has called for an all-party meeting later in the evening. The ruling BJP and the opposition Congress have also called a separate meeting of their MLAs. As per sources, the BJP's legislatures will assemble at Chief Minister Shivraj Singh Chouhan's official residence, while the leader of opposition in the state Assembly Dr Govind Singh will chair a meeting of party MLAs at MPCC head Kamal Nath's residence. "I would ensure that the session runs uninterrupted with healthy discussions on subjects put before the House. We can not afford to waste time as already the session is very brief. Therefore, any kind of disturbance or needless approach from MLAs from across the party line would not be tolerated," Speaker Girish Gautam tolds IANS. Meanwhile, the leader of opposition said the Congress MLAs would co-operating in ensuring a fruitful session. Talking to IANS, Singh pointed out: "We are prepared to corner the ruling BJP on several public issues, especially on scams, corruption, unemployment, increasing crime against women and tribals, inflation and many more. We will also demand answers from the Chief Minister as to why one after another scams were reported in the state." The opposition cadre has prepared to corner the ruling BJP on many fronts. "A meeting will be held later in the evening, wherein all Congress MLAs will be given a specific role or subject to be raised. We will also plan our detailed strategy for the session," Dr Singh stated. /IANS