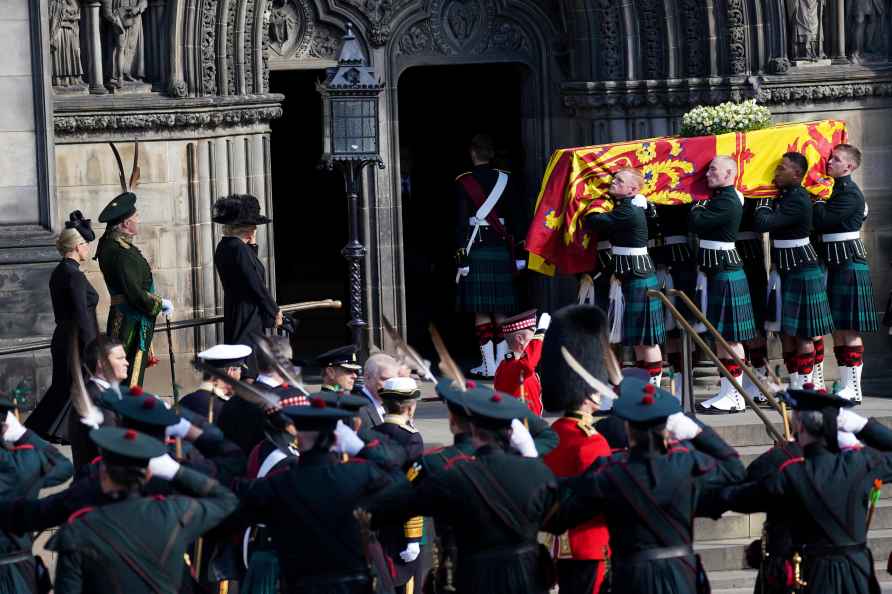 [The coffin of Britain's Queen Elizabeth II is carried into St Giles' Cathedral, Edinburgh, Scotland, Monday Sept. 12, 2022. King Charles III arrived in Edinburgh on Monday to accompany his late mother?Äôs coffin on an emotion-charged procession through the historic heart of the Scottish capital to the cathedral where it will lie for 24 hours to allow the public to pay their last respects. /PTI] Bhopal, Sep 12 : Shankaracharya of Jyotish, Dwarka and Sharda peeth, Swami Swaroopanand Saraswati, who breathed his last at his ashram in Madhya Pradesh on Sunday afternoon, was given a farewell with traditional rituals, chanting of mantras and reciting of shlokas by hundreds of Hindu seers on Monday. The Shankaracharya's body was placed on a chariot and carried from Jhoteshwar Paramhansi Ganga Ashram to an Ashram located near the hillside where his mortal remains were ritualistically placed in 'Samadhi' in Narsinghpur district. The funeral procession was taken out amid the chanting of mantras and shlokas by hundreds of seers, while thousands of his disciples and locals bid him a tearful farewell. Before the funeral procession, the successors of Swami Swaroopanand were also announced. According to reports, Swami Avimukteshwaranand has been made the head of Jyotishpeeth Badrinath and Swami Sadanand has been made the head of Sharda Peeth Dwarka. The names of both were announced in front of the body of the Shankaracharya. Subodhanand Maharaj, the personal secretary of the Shankaracharya, announced the names of the successors. Many politicians, including Madhya Pradesh Chief Minister Shivraj Singh Chouhan, MP Congress chief Kamal Nath, Union Minister Prahlad Patel and many others had come to pay their last respects. Later, Kamal Nath said that the Madhya Pradesh government has not declared state mourning after the death of the Shankaracharya. Nath urged Chief Minister Chouhan to declare state mourning. "I urge the Chief Minister to declare state mourning on the departure of Pujya Shankaracharya ji, respecting the sentiments of the entire Hindu society," Kamal Nath said. The 99-year-old seer -- perhaps the oldest surviving Shankaracharya, passed away following prolonged illness around 3.30 p.m. after a mild heart attack on Sunday afternoon at his Ashram in Narsinghpur district. Just a few days ago, the seer had celebrated his 99th birthday on the occasion of Hartalika Teej. Swami Swaroopanand Saraswati was born in Dighori village in Seoni district of Madhya Pradesh in 1924. He was born in a Brahmin family and his childhood name was Potiram Upadhyay. He had left home aged just nine years in pursuit of God. He was a disciple of Shankaracharya Brahmananda Saraswati of Jyotir Math and of Shankaracharya (disputed) Krishnabodha Ashrama of Jyotirmath. In 1950, his Guru Brahmananda made him a Dandi Sanyasi. He became the president of the Akhil Bhartiya Ram Rajya Parishad established by Swami Karpatriji. On Krishnabodha Ashrama's demise in 1973, the title of Shankaracharya (disputed) of Jyotir Math, Badrinath passed to Swami Swaroopanand. Nine years later in 1982, he also became the Shankaracharya of Dwarka Peeth. When aged just 18, he had become a part of the country's freedom movement and was known as the "Revolutionary Sadhu" for taking part in the 1942 Quit India Movement. He was jailed for it and served a prison sentence for around a year and a half. /IANS

'The Meaning of Mariah Carey' is just tip of the iceberg, says pop star

Los Angeles, Nov 27 : Actress-singer Mariah Carey's life is quite layered. The 52-year-old singer, who is working on a TV series based on her memoir, believes her route to superstardom has been more c […]

Dimapur: People from Rengma tribe perform a dance during Ngada festival, which marks the end of the harvest season, at Chumukedima in Dimapur district, Monday, Nov. 28, 2022. ( /PTI […]