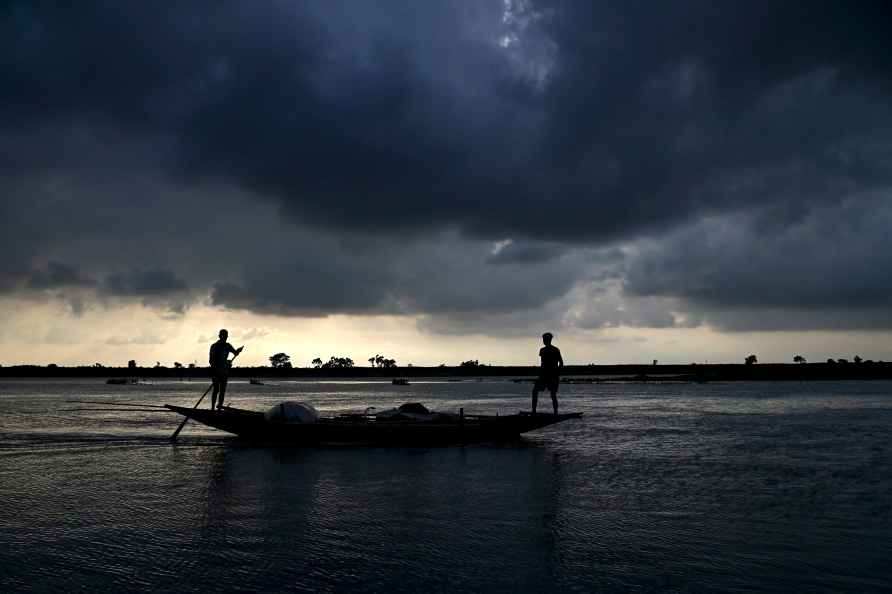 [Nadia: Thick clouds hover over the Hooghly river, in Nadia, Monday, Sept. 12, 2022. According to the weather department, heavy rainfall along with thunderstorms and lightning are very likely over Odisha, Chhattisgarh, Vidarbha and East and West Madhya Pradesh till September 13. IMD has predicted that the rainfall in Maharashtra is likely to increase and will continue till September 14. ( /PTI] Tokyo, Sep 12 : Typhoon Muifa has brought heavy downpours and gale-force winds to islands in Japan's Okinawa, the meteorological agency said on Monday. According to the Japan Meteorological Agency (JMA), Muifa was over waters 30 km south of Ishigaki Island with an atmospheric pressure of 955 hectopascals at its centre and maximum wind speeds of up to 216 km per hour, reports Xinhua news agency. The JMA, along with warning residents in the typhoon's path to remain vigilant for landslides and rivers breaching their banks, also said the typhoon is packing winds strong enough to damage if not topple homes. The slow-moving typhoon, the 12th of the season, is expected to continue to bring severe weather conditions to the Sakishima Islands through Wednesday as it moves northward, it said. On Hateruma Island, a record 352.5 mm of rainfall was recorded. Up to 70 mm of rainfall per hour is expected in the Sakishima Islands on Monday, while 42 mm of rainfall per hour is expected to hit Ishigaki, the agency said. The JMA said the atmospheric pressure is extremely unstable as a result of the typhoon and while wind speeds may decrease to 72 to 108 km per hour on Wednesday, Okinawa could see as much as 300 m of rainfall in the 24-hour period through noon on Tuesday. In the 24-hour period though noon on Wednesday, meanwhile, 50 to 100 mm of rain is expected, the weather agency said. The powerful typhoon has caused disruption to transportation services in the region, with the country's two top carriers Japan Airlines and All Nippon Airways cancelling flights to and from the popular tourist destinations of Miyako and Ishigaki islands. /IANS