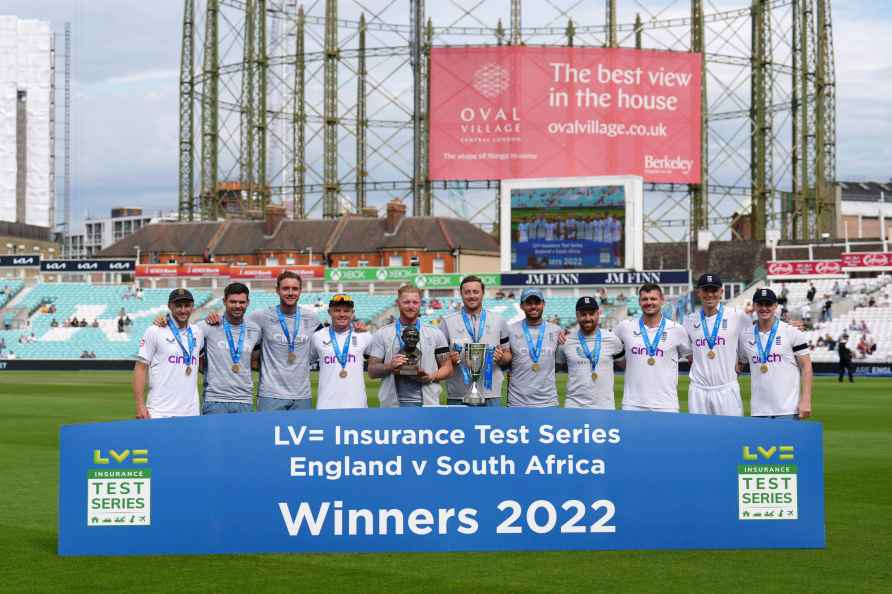 [London; The England team pose with the trophy after winning the series following victory on day five of the third LV= Insurance Test match at the Kia Oval, London, Monday Sept. 12, 2022. /PTI] The Oval (London), Sep 12 : Hosts England were on the verge of a series-clinching victory at stumps on the fourth day of the third and final Test of the series, needing 33 more runs with all ten wickets in hand to beat South Africa, here on Sunday. England, who gained 40 runs lead in the first innings, shot out South Africa for 169 runs in their second essay with veteran pacer Stuart Broad claiming 3-45, Ben Stokes taking 3-39 and Ollie Robinson and James Anderson claiming two wickets apiece, leaving the host to score 130 runs to win the Test on the final day on Monday. At stumps on Sunday, England were 97 for no loss in their second innings with Zak Crawley batting on 57 (44 balls 4 x 10) and Alex Lees unbeaten on 32. They now need 33 more runs to win the match on the final day of the match which has already lost the first day to rain while play on the second day was abandoned in honour of Queen Elizabeth II. Victory on Monday will seal a 2-1 win for England in the three-game series which will be a big feat for the hosts as England lost the first Test by an innings and 12 runs. They made a splendid comeback to win the second Test by an innings and 85 runs. It was the England bowlers, particularly Broad that put their team on the road to victory. In the process, Broad surpassed Glenn McGrath as the pacer with the second most wickets in Test cricket history. Broad dismissed South Africa skipper Dean Elgar, trapping him lbw for 36 on day four of the third Test at The Oval. The scalp was Broad's 564th in Test cricket, surpassing Glenn McGrath to become the second highest wicket-taker amongst pacers in Test cricket history. He now trails his partner James Anderson in the wickets column for pacers, who has 666 wickets to his name. Overall, Broad became the fifth highest wicket-taker in Test cricket, trailing Muttiah Muralitharan (800), Shane Warne (708), James Anderson (666) and Anil Kumble (619). Broad's wickets were crucial in the context of the game, with the match evenly poised. England first restricted the visitors to 118, but a brilliant performance from South Africa allowed them to bowl the hosts out for 158 -- a lead of 40 runs. The wicket of Elgar was crucial as the skipper was looking settled at the crease on 36 and looking on course for a big knock. Broad didn't have to wait long for his 565th scalp, as another lbw dismissal brought him the scalp of Ryan Rickleton. He would also dismiss Keshav Maharaj to take his tally up to 566. While Broad did the maximum damage, skipper Stokes also claimed 3-39 while James Anderson contributed to South Africa's downfall by claiming 2-37 off 15.2 overs. Ollie Robinson, hero of England's first inning bowing effort with 5-49, claimed 2-40 in the second as South Africa were bowled out for 169. For South Africa, Elgar top-scored with 36 runs while Sarel Erwee contributed 26 and Keegan Petersen added 23 runs. Brief scores: South Africa 116 & 169 all out in 56.2 overs (Dean Elgar 36, Sarel Erwee 26; Stuart Broad 3-45, Ben Stokes 3-39) vs England 158 & 97 for no loss in 17 overs (Zak Crawley 57 not out, Alex Lees 32 not out). England need 33 runs to win. /IANS