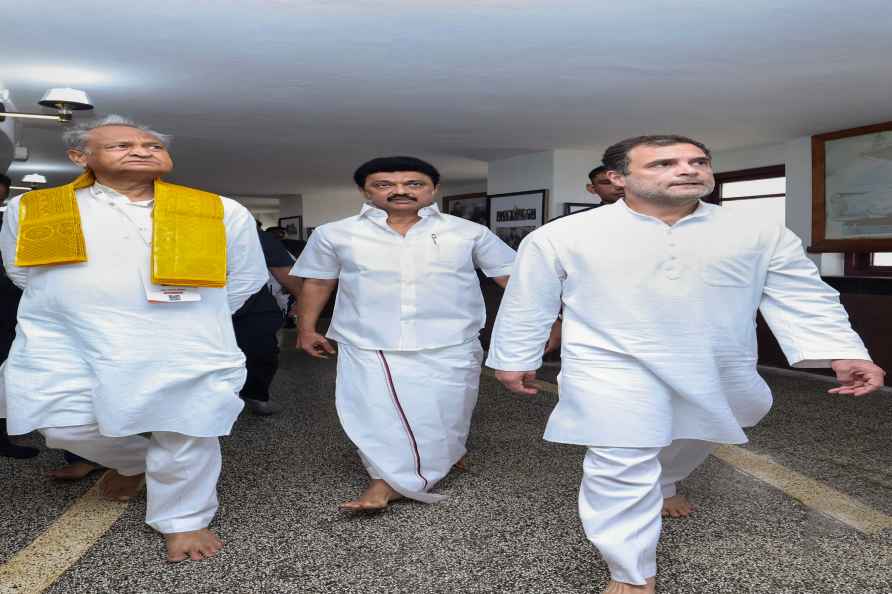 Kanyakumari, Sep 7 : Tamil Nadu Chief Minister M.K. Stalin on Wednesday handed over the national flag to Rahul Gandhi to flag off the Bharat Jodo Yatra, where the Congress leader, accompanied by 117 fellow yatris, will walk 3,570 km from Kanyakumari, the country's southernmost point, to Kashmir. Before handing over the flag, Stalin hugged Gandhi. The yatra will traverse 12 states and 2 Union Territories while Congress General Secretary, Organisation, K.C. Venugopal said: "We have not involved the poll-bound states of Gujarat and Himachal Pradesh." However, all the party's state organisations will take a separate padyatra in their respective states for one month while all the blocks will take out a padyatra on Wednesday. The party's 'Bharat Jodo Yatra' will have Gandhi and his companions meeting select group of people from 7 a.m. to 10.30 a.m. everyday while it will be mass connect programme in the evening. All the yatris, including Gandhi, will rest in specialised containers and the end of the day. Ahead of the yatra, Congress General Secretary Jairam Ramesh on Wednesday said that this will be turning point of Indian politics and will mark a new beginning. /IANS