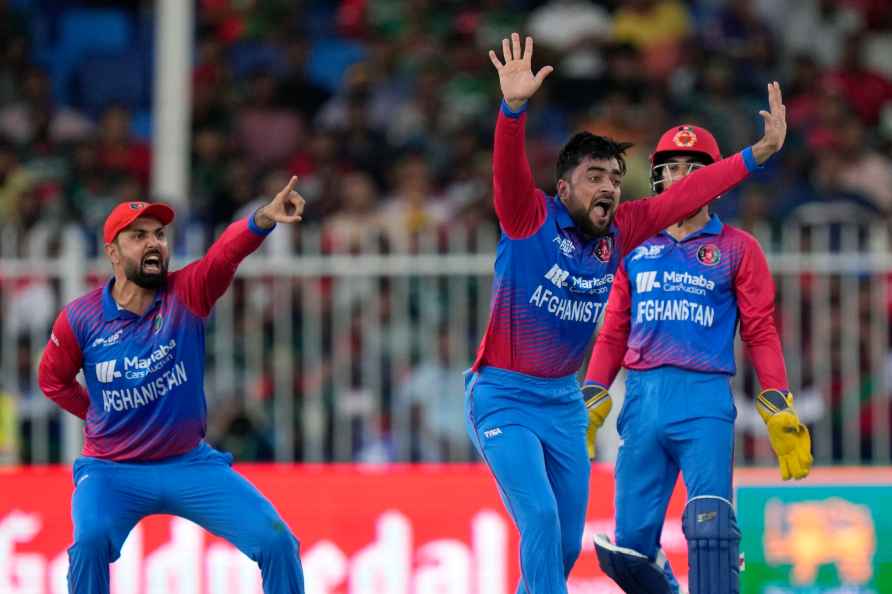 [Sharjah: Afghanistan's Rashid Khan, second right, and teammates appeal successfully LBW out of Bangladesh's Mushfiqur Rahim during the T20 Asia Cup cricket match between Afghanistan and Bangladesh, in Sharjah United Arab Emirates, Tuesday, Aug. 30, 2022. /PTI] Sharjah, Aug 30 : Bangladesh captain Shakib Al Hasan won the toss and opted to bat first against Afghanistan in a Group B match of the Asia Cup 2022 at the Sharjah Cricket Stadium, here on Tuesday. Bangladesh, who are opening their campaign in the ongoing Asia Cup, have decided to go with three seamers and two spinners. "We will bat first. It will be difficult for Afghanistan, so that is what we will look to do. We have three spinners and two seamers -- so our bowling is pretty much covered," said Shakib at the toss. "Afghanistan is a very good side in the T20 format, we have prepared well for their bowlers and hopefully, we can show what we can do. (On Asia Cup) We are all neighbouring countries, everyone wants to watch us play each other so I am happy to be part of such a competition," he added. On the other hand, Mohammad Nabi-led Afghanistan, who won their last game against Sri Lanka, haven't made any changes to their playing XI for this match. "The way we played last game was brilliant, the morale of the team is high and we want to play the same way today. Same team today. Maybe it will be a bit low today, this pitch. We will look to keep them to a low total," said Nabi at the toss. Playing XIs: Bangladesh: Mohammad Naim, Anamul Haque, Shakib Al Hasan(c), Afif Hossain, Mushfiqur Rahim(w), Mosaddek Hossain, Mahmudullah, Mahedi Hasan, Mohammad Saifuddin, Taskin Ahmed, Mustafizur Rahman Afghanistan: Hazratullah Zazai, Rahmanullah Gurbaz(w), Ibrahim Zadran, Najibullah Zadran, Karim Janat, Mohammad Nabi(c), Rashid Khan, Azmatullah Omarzai, Naveen-ul-Haq, Mujeeb Ur Rahman, Fazalhaq Farooqi /IANS