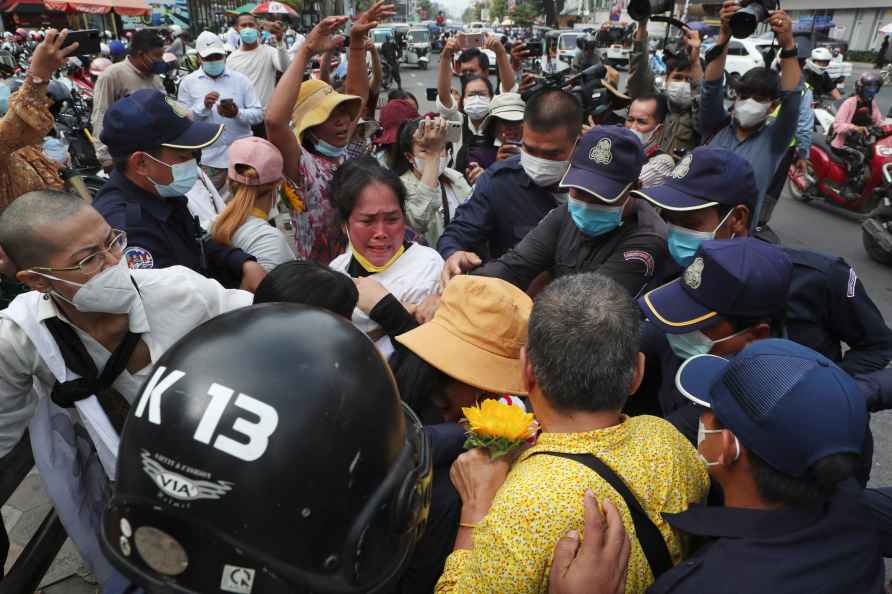 Visakhapatnam, Aug 19 : Demolition of alleged unauthorised constructions in Palasa town in Andhra Pradesh's Srikakulam district has triggered tension. The revenue and municipal department officials reached the Srinivasa Nagar area late on Thursday night with bulldozers to demolish illegal structures. The officials said houses were built illegally in the lake bed. The local residents staged a strong protest. They argued that they have been living in the area for the last 40 years and have been paying electricity bills and property tax. This led to an argument between the officials and local residents. When the bulldozers reached near the house of G. Suryanarayana, a local councillor of the opposition Telugu Desam Party (TDP), the residents sat on the road in front of the bulldozers. They alleged that the demolition was being carried out due to political vendetta. Some people fell at the feet of Palasa Thasildar M. Madhusudhan Rao pleading with him not to demolish the houses. Meanwhile, leaders of ruling YSR Congress Party (YSRCP) also reached there. Heated arguments between the TDP and YSRCP leaders triggered tension in the area. YSRCP leaders brought the issue to the notice of state minister S. Appalaraju, who comes from the same district. Durga, one of the residents, spoke to the minister over the phone. The minister promised to provide land pattas to those who will be rendered homeless. TDP MLA from Ichchapuram, B. Ashok reached the spot after midnight. He alleged that the police were acting at the behest of the ruling party. Police detained the MLA and shifted him to the police station. Later, the bulldozers were sent back. Thasildar said the high court had sought details about the encroachments on the lake bed. He said 52 houses were illegally built. The official said he told the dwellers that if they give their objections in writing the same would be conveyed to the high court. /IANS

Kanpur (Uttar Pradesh), Sep 19 : The body of a daily wage labourer was found hanging from a bamboo tree with his knees resting on the ground. The family of the deceased has expressed apprehensio […]

US will defend Taiwan if China attacks: Biden

Washington, Sep 19 : US President Joe Biden has reiterated that Washington will defend Taiwan in the event of an "unprecedented attack" by China. During a CBS News interview on Sunday, Biden was […]

Lucknow, Sep 19 : The Kalyan Singh Super Specialty Cancer Institute (KSSSCI) is planning to replicate the model of functioning of Tata Memorial Hospital (TMH) in Mumbai. The effort is to learn t […]