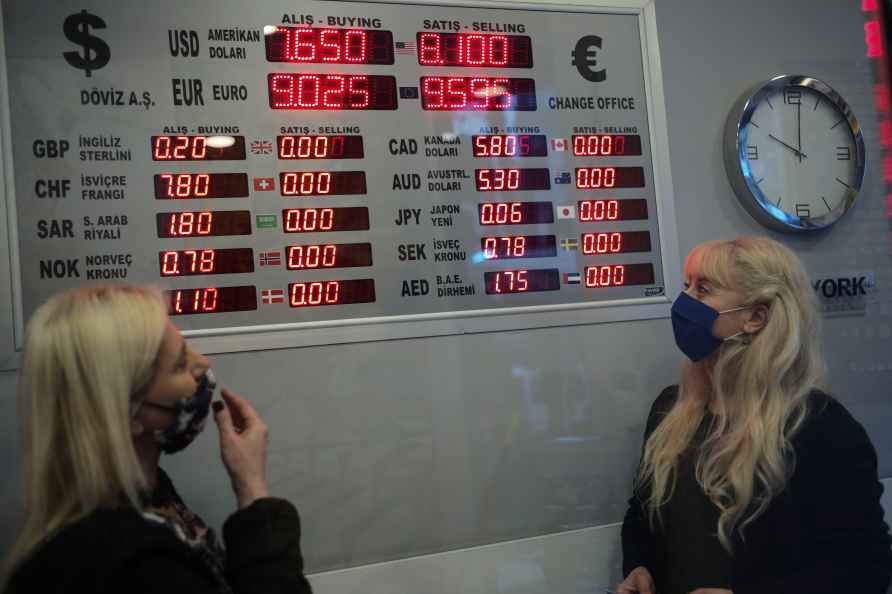 Ankara, Aug 19 : The Turkish lira weakened by as much as 1 per cent against the US dollar after the country's central bank decided to lower its benchmark interest rate. The bank in Ankara announced on Thursday that the key rate would drop to 13 per cent from previously 14 per cent, reports dpa news agency. The lira fell past 18.1 versus the dollar. The central bank has not raised its benchmark rate since December 2021 following a round of controversial rate cuts, in line with President Recep Tayyip Erdogan's demands. The Turkish currency has been steadily losing in value for almost three years after Erdogan openly pressured the central bank to pursue his unorthodox theory that higher interest rates cause higher inflation. Turkish consumers already struggle with high inflation and spiralling energy and food prices. /IANS

Hooghly: Union Minister for Women and Child Development Smriti Irani during her visit to the Mahesh Jagannath Temple, at Srirampur in Hooghly district, Monday, Sept. 19, 2022. ( /PTI […]

Mahagathbandhan to counter Shah through four rallies in Bihar's Seemanchal

Patna, Sep 19 : In a bid to counter the rally of Union Home Minister Amit Shah, the Mahagathbandhan leaders have decided to organise four rallies in the Seemanchal region of Bihar. Shah is sched […]

**EDS: IMAGE VIA @INCIndia** Punnamada: Congress leader Rahul Gandhi participates in a snake boat race exhibition in Punnamada Lake of Kerala, Monday, Sept. 19, 2022. Gandhi is in Kerala for the Bhara […]