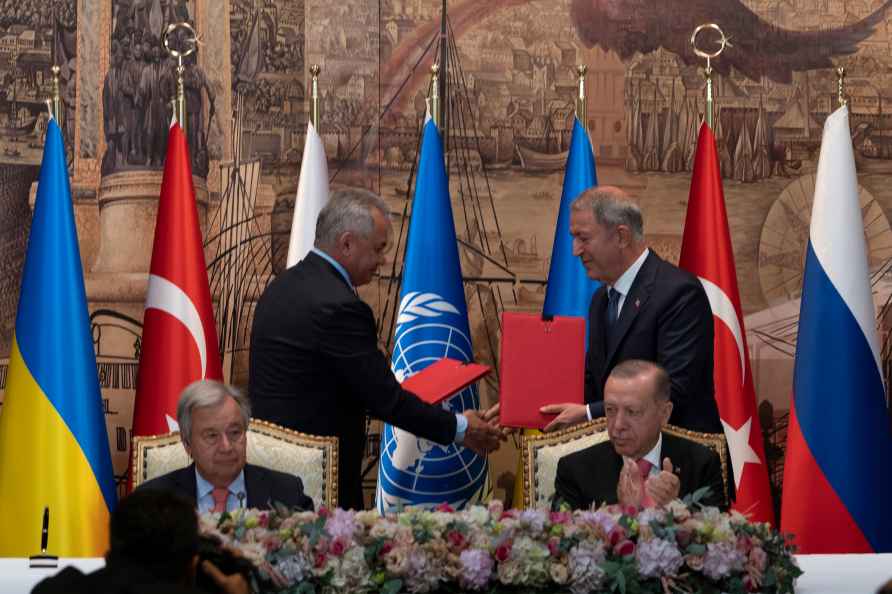 Ankara, Aug 19 : A total of 622,000 tonnes of grain have been shipped from Ukraine's Black Sea ports since an agreement was reached in late July, according to the Turkish Defence Ministry. Twenty-five vessels left Ukrainian ports to export grain while 18 ships have entered the ports since August 1, the Ministry said on Twitter. Turkey and the UN helped bring Russia and Ukraine to an agreement on the export of Ukrainian grain at the end of July, breaking a blockade on Ukrainian ports since Moscow's invasion in February, reports dpa news agency. The vessels have to undergo inspection by an international team at a joint coordination centre in Istanbul set up to monitor the grain exports across the Black Sea. The shipments are seen as crucial for the many countries dependent on grain from Ukraine, known as the breadbasket of Europe. Shortages and soaring prices have led to fears of severe shortages, especially in poorer nations in Asia, Africa and the Middle East, with famine looming in many areas. Millions of tonnes of grain have been stuck in Ukrainian ports since Russia attacked its neighbour and blockaded the country's ports. Ukraine, for its part, had mined the port approaches for fear of the Russian invasion. UN Secretary General Antonio Guterres and Turkish President Recep Tayyip Erdogan met Ukrainian President Volodymyr Zelensky in Ukraine on Thursday. /IANS

**EDS: IMAGE VIA @INCIndia** Punnamada: Congress leader Rahul Gandhi participates in a snake boat race exhibition in Punnamada Lake of Kerala, Monday, Sept. 19, 2022. Gandhi is in Kerala for the Bhara […]

9th Session of Governing Body of the International Treaty

**EDS: IMAGE VIA PIB** New Delhi: Union Minister for Agriculture and Farmers Welfare Narendra Singh Tomar at the inauguration of the 9th Session of Governing Body of the International Treaty on Plant […]