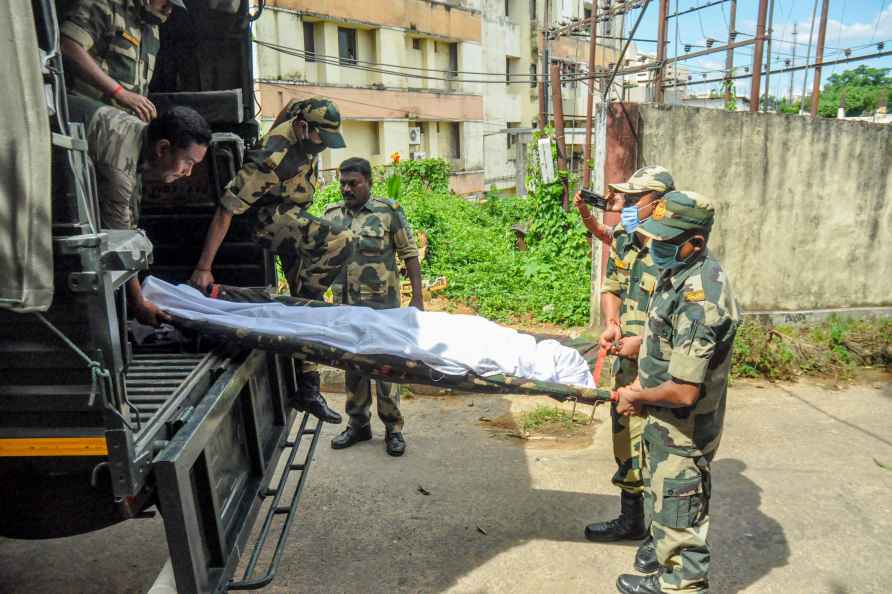 [Agartala: Border Security Force (BSF) carry the mortal remains of head constable Girjesh Kumar Uddey to the morgue of Govind Ballabh Pant Hospital in Agartala, Friday, Aug. 19, 2022. Uddey was killed in an encounter with banned insurgents along the Indo-Bangla border. ( /PTI] Agartala, Aug 19 : In the first incident of terrorist violence in Tripura this year, a Border Security Force (BSF) head constable was gunned down by militants of the outlawed National Liberation Front of Tripura (NLFT) on Friday, police said. The BSF has sought the help of Border Guards Bangladesh (BGB) to nab the NLFT militants, belonging to Biswa Mohan faction. A police spokesman said that the NLFT cadres fired on a BSF patrolling party at Simna Two along the India-Bangladesh border in north Tripura district, injuring Head Constable Girjesh Kumar Uddey, 53, who was shifted to an Agartala hospital but succumbed to his injuries. "The NLFT extremists fired from the Bangladesh territory and immediately after the ambush, fled deep inside the mountainous forest of the neighbouring country after the BSF troopers retaliated," the spokesman told IANS. A huge contingent of Tripura State Rifles (TSR) led by Inspector General of Police, Law and Order, Arindam Nath and senior BSF officials have rushed to the mountainous areas for taking further course of action. A BSF official said that massive operations are underway in close coordination with the BGB to track down the insurgents responsible for the attack. The slain Head Constable, a resident of Madhya Pradesh, belonged to the BSF's 145th Battalion. /IANS

SP march to UP Assembly stopped, Akhilesh on dharna
[Lucknow: Samajwadi Party President Akhilesh Yadav being stopped by police during a march from party office to UP Vidhan Bhavan, on the first day of M

London, Sep 19 : The England and Wales Cricket Board (ECB) is reportedly devising a plan where England pace-bowling stalwarts James Anderson and Stuart Broad could be made player-coaches, even as the […]