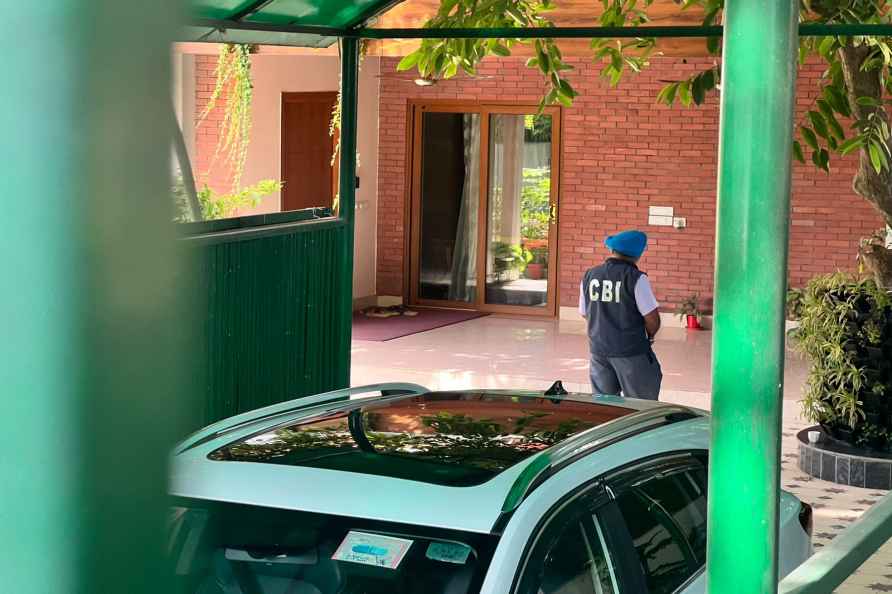 [New Delhi: A Central Bureau of Investigation (CBI) official during a raid at the residence of Delhi Deputy Chief Minister Manish Sisodia in connection with alleged irregularities in Delhi Excise Policy, in New Delhi, Friday, Aug. 19, 2022. The CBI carried out searches at over 10 locations in Delhi-NCR. ( /PTI] New Delhi, Aug 19 : The Central Bureau of Investigation (CBI) on Friday was conducting raids at 22 locations in the national capital, including the residence of Delhi Deputy Chief Minister Manish Sisodia in connection with irregularities in the new excise policy case. A CBI team reached Sisodia's residence early in the morning. The probe teams were also raiding the houses of former Commissioner Excise E. Gopikrishan, two public servants and others. Sisodia claimed that he was innocent and the CBI was working at the behest of the Centre. "CBI has come. They are welcome. We are extremely honest. Making the future of millions of children. It is very unfortunate that those who do good work in our country are harassed like this. That is why our country has not yet become number-1," Manish Sisodia tweeted in Hindi. Sisodia went on to say that they will give full cooperation to the CBI so that the truth can come out soon. He said that till now many cases have been filed against him but nothing has come out. "Nothing will come out of it either. My work cannot be stopped for good education in the country. These people are troubled by the excellent work of Delhi's education and health. That is why the Health Minister and Education Minister of Delhi has been caught so that the good work of education, health can be stopped. "There are false allegations against both of us. The truth will come out in court. Sisodia further said in his tweet in Hindi," Sisiodia said further in his tweet in Hindi. Meanwhile, BJP leader Kapil Mishra accused him of being corrupt. "Corruption of Satyendra Jain has been caught, Sisodia's scams are now coming in front of the public. "The case of loot of crores of rupees in the name of liquor contracts is only the beginning. Our fight against the corruption of Kejriwal government is on, those who looted Delhi will have to go to jail," Mishra tweeted. The CBI has lodged an FIR in connection with the alleged irregularities in the new Excise policy case against Manish Sisodia and others. The Delhi L-G had requested the CBI to look into the matter as there were many loopholes in the liquor policy of the Delhi government. Further details were awaited. /IANS

London, Sep 19 : More than 2,000 guests will gather in London's Westminster Abbey on Monday for the funeral of Queen Elizabeth II, who passed away on September 8 at the age of 96. Before the ser […]

Abuja, Sep 19 : At least 19 people were killed and eight others seriously injured in a road accident involving three vehicles in Nigeria's capital city of Abuja, traffic police said. The tragedy […]

Jilted lover, his parents held for murder of woman

Lucknow, Sep 19 : The parents of a man who kidnapped and killed a 21-year-old woman, have been arrested for helping their son, a jilted lover, in hiding and disposing of the body. Harshit Shukla […]