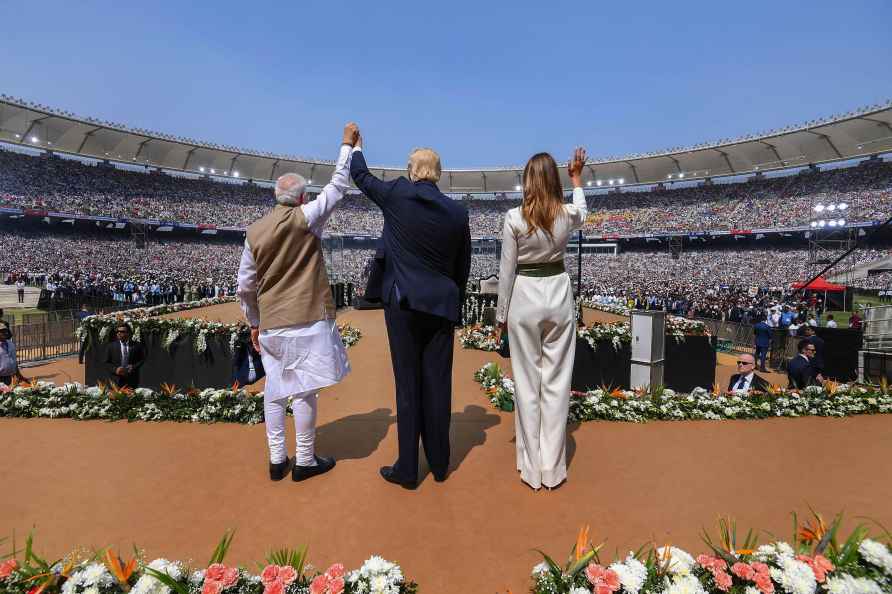 [**EDS: FILE IMAGE** New Delhi: In this Monday, Feb. 24, 2020 file image Prime Minister Narendra Modi joins hands with the then US President Donald Trump as his wife Melania Trump waves during the 'Namaste Trump' event at Sardar Patel Stadium in Ahmedabad. The Centre spent approximately Rs 38 lakh on the 36-hour State visit by former US President Donald Trump in 2020 in accommodation, meals, logistics etc, the External Affairs Ministry has told the Central Information Commission. ( /PTI] Washington, Aug 18 : Just a day after losing the Wyoming Republican primary, US Representative Liz Cheney, known to be a fierce critic of former President Donald Trump, said that she will mull over a White House run. "That's a decision that I'm going to make in the coming months," Xinhua news agency quoted Cheney as saying in an NBC News interview on Wednesday. Cheney, a three-term congresswoman and also the vice chair of the House committee probing the January 2021 Capitol riot, lost to Harriet Hageman, a lawyer who has worked to block federal regulations in Wyoming and who was endorsed by Trump. With 99 per cent of the vote counted on Wednesday, Hageman led Cheney by about 37 percentage points. Cheney had represented the Wyoming congressional district since 2017. She told her supporters Tuesday night that she had called Hageman to concede the race but vowed to "do whatever it takes to keep Donald Trump out of the Oval Office". Liz Cheney, the daughter of former Vice President Dick Cheney, is among a small group of House Republicans who voted to impeach Trump for his role in the January 6, 2021, attack on the Capitol. The 56-year-old also lost her rank as House Republican conference chair due to her criticism of Trump. A staunch conservative laser focused on national security issues, Liz Cheney was first elected to Congress in 2016. Her father held the seat in the 1980s. /IANS

Chennai, Sep 17 : Actors Mahesh Babu, Khusbhu Sundar, Mammootty and Mohanlal were among those who wished Prime Minister Narendra Modi on Saturday on the occasion of his 72nd birthday. Taking to […]

Chennai, Sep 17 : The makers of director Praveen Sattaru's action thriller 'The Ghost', featuring Telugu superstar Akkineni Nagarjuna in the lead, have now released the first single from the film, tit […]