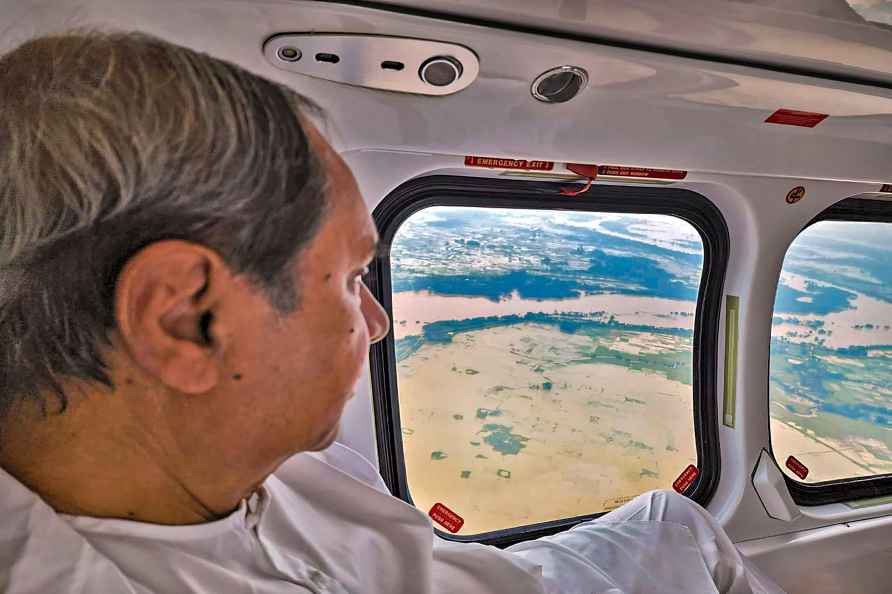 [Odisha: Odisha CM Naveen Patnaik conducts an aerial survey of flood-affected areas of Khordha, Puri, Cuttack, Jagatsinghpur and Kendrapara districts in Odisha, Thursday, Aug. 18, 2022. ( /PTI] Bhubaneswar, Aug 18 : Odisha Chief Minister Naveen Patnaik took off from Biju Patnaik International Airport here in a helicopter on Thursday and inspected the flood-affected areas through an aerial survey. He examined the flood situation in the districts of Kendrapara, Jagatsinghpur and Puri and expressed concern over the large areas inundated by the flood and damage of crops and houses. The Chief Minister has directed concerned officials to expedite the distribution of relief and cooking foods to the affected people. He also asked to ensure proper healthcare services and drinking water supply in the flood-hit areas. Further, he has also asked to provide necessary cattle foods and veterinary services in those areas. After making the aerial survey, the Chief Minister has announced 15 days relief for the people, who are residing in the marooned villages of Khurda, Puri, Cuttack, Kendrapara and Jagatsinghpur districts. Similarly, a seven-day relief will be given to the affected people of Sambalpur, Bargarh, Sonepur, Boudh and Angul districts, he said. The CM has directed the state administration to assess the damage caused due to the flood within seven days of the receding of water and provide relief assistance for house and crop damages within another 15 days. Meanwhile, the India Meteorological Department (IMD) on Thursday said that a fresh low pressure area has formed over northeast and adjoining areas of east-central Bay of Bengal, Bangladesh & Myanmar coasts in the morning. It is very likely to move north westwards and likely to concentrate into a depression by Friday morning over north Bay of Bengal and adjoining West Bengal & Bangladesh coasts, IMD director general Mrutyunjay Mohapatra said. Thereafter, the system is likely to move west-north-westwards across Gangetic West Bengal, north Odisha, Jharkhand and north Chhattisgarh, he said. Under its impact, few places of coastal and north Odisha would experience light rainfall on Thursday while heavy to very heavy rainfall would occur in many places of north, coastal and western parts of the state in the next two days. The weather department warned that the heavy rainfall may cause water logging in low lying areas, traffic congestion in urban areas, inundation of agriculture fields, landslides in vulnerable hilly areas, some damage to unpaved (kutcha) road and vulnerable teporaray (kutcha) houses. It may lead to significant rise in the water level of rivers. /IANS

Mumbai, Sep 18 : Huma Qureshi candidly talked about Bollywood superstar Madhuri Dixit and recalled her working experience with the 'Ek Do Teen' fame in the 2014 black comedy, 'Dedh Ishqiya'. In […]

Husband, two others held for gang-rape and murder of woman in Gujarat

Rajkot (Gujarat), Sep 18 : The Rajkot police have detained three men, including the husband and brother-in-law for their role in the gang-rape and murder of a 50-year-old woman. The police were […]