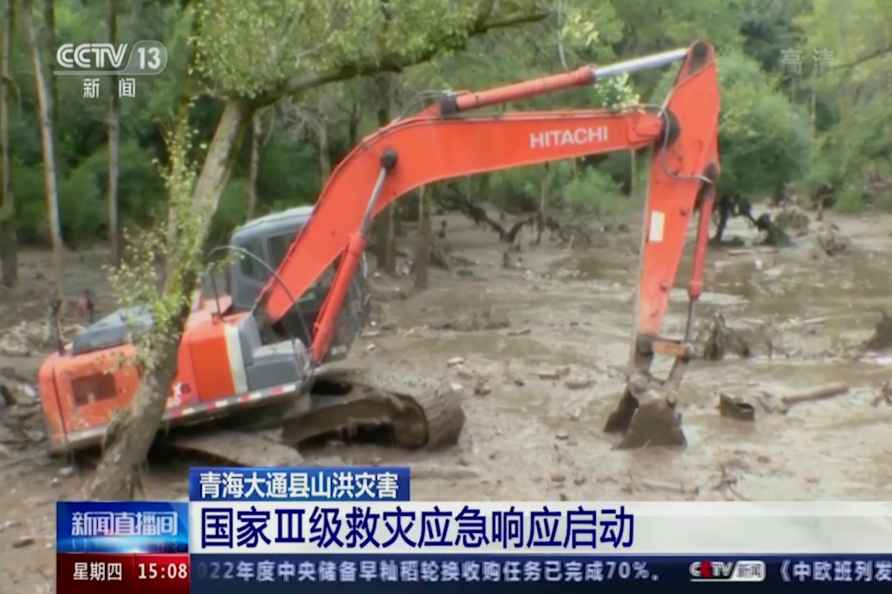 [In this image taken from video footage run by China's CCTV, an excavator tries to clear mud from an area in the aftermath of flooding in Datong county in western China's Qinghai province on Thursday, Aug. 18, 2022. Some people died and others were missing after a sudden rainstorm in western China triggered a landslide that diverted a river and caused flash flooding in populated areas, Chinese state media said Thursday. Chinese characters on screen reads "National level 3 disaster relief activated." (CCTV via /PTI] Beijing, Aug 18 : At least 16 people have died and 36 others were reported missing after a flash flood in north-western China, state media said on Thursday. The flash floods occurred on Wednesday evening in the mountains in Datong county near the city of Xining in Qinghai province, after heavy rainfall, reports dpa news agency citing state media. The downpours triggered landslides that blocked and diverted rivers, affecting more than 6,000 people in two townships and six villages, the report said. The authorities mobilised around 2,000 rescue workers, including police officers, paramilitary units, emergency services and government officials, for recovery efforts. Qinghai province has declared the second-highest alert level in its four-tier emergency and disaster response system, state media reported. /IANS

Mumbai, Sep 18 : Huma Qureshi candidly talked about Bollywood superstar Madhuri Dixit and recalled her working experience with the 'Ek Do Teen' fame in the 2014 black comedy, 'Dedh Ishqiya'. In […]

Husband, two others held for gang-rape and murder of woman in Gujarat

Rajkot (Gujarat), Sep 18 : The Rajkot police have detained three men, including the husband and brother-in-law for their role in the gang-rape and murder of a 50-year-old woman. The police were […]