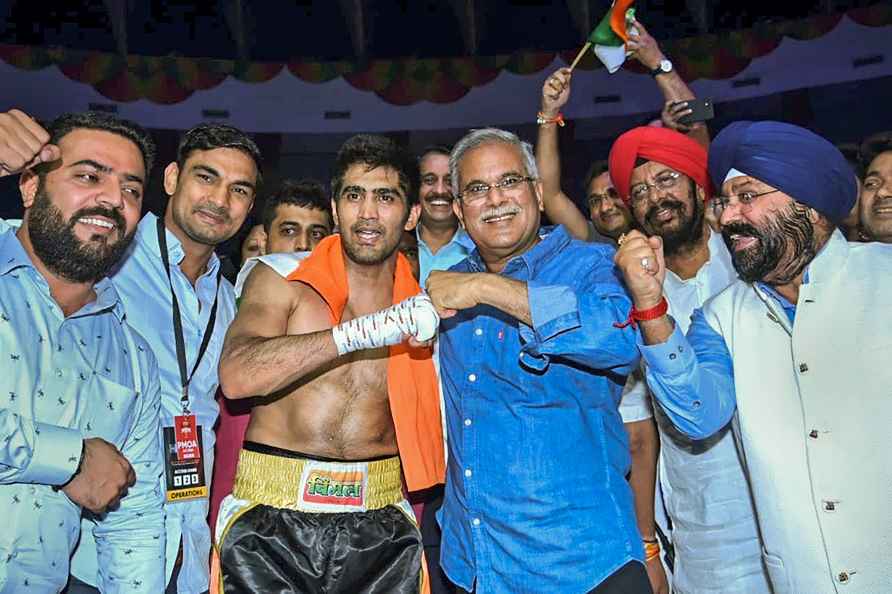 [**EDS: TWITTER IMAGE POSTED BY @bhupeshbaghel ON WEDNESDAY, AUG. 17, 2022** Raipur: Boxer Vijender Singh with Chief Minister of Chhattisgarh Bhupesh Baghel after defeating Elisu Sule during Jungle Rumble Boxing Competition at Sardar Balbir Singh Juneja Indoor Stadium in Raipur. ( /PTI] Raipur, Aug 17 : After a long wait of 19 months, Olympic bronze medallist Vijender Singh returned to winning ways after defeating Ghana's Eliasu Sulley in a professional boxing event 'The Jungle Rumble' at the Balbir Singh Juneja Stadium here on Wednesday. With a record of 12-1, Vijender Singh was completely focused during the bout and did not miss a single beat as he went on to register his 13th win with a knockout against Eliasu Sulley from Ghana in the super middle weight event. "Thank you to the people of Raipur, it is good to be here in Chhattisgarh along with my team. We haven't been fighting for 2 years and now that we start our season with a victory, it is an amazing feeling. I have seen Eliasu Sulley fight and I know everyone thinks it is very easy and that he is an easy opponent but my coaches and my team know that it was not at all. "I want to thank Baghelji because he has supported this and given the youth the gift of sports. I look forward to my next fight in December, hopefully not with such a gap this time because I didn't expect it to end this quickly and was ready for all 6 rounds," said an ecstatic Vijender Singh after winning the fight. The fans were in for an absolute treat as Vijender Singh was at his best and showed his flair and the reason he is the pioneer for professional boxing in India. True to his promise, Vijender Singh treated everyone both those present in the stadium and the ones that were at home watching the broadcast live at home a knockout. Knocking out the fighter that is touted as the knockout specialist in the 2nd round itself after 2 minutes 7 seconds. "The guy was hurt from the first round and the fight should have ended way before, Vijender gave such a solid punch and Eliasu should have been knocked out way sooner than he did," said Lee Beard in the post event press conference. It was a strong comeback for Vijender Singh, who bounced back from his first-ever pro boxing defeat last year. Vijender Singh was defeated by his Russian opponent Artysh Lopsan in Goa through a technical knockout in the fifth round. "Everyone is waiting for this fight for Vijender to win against Eliasu Sulley. I enjoy watching boxing and feel extremely proud when athletes win at boxing tournaments. We are very enthusiastic about sports in Raipur and Chattisgarh and are working at promoting other sports as well," said Bhupesh Baghel, Chief Minister, Chattisgarh at the start of the match. "I want the youth of our country to play the sport, and I hope I have been able to inspire atleast one person watching me today," Vijender Singh said. /IANS