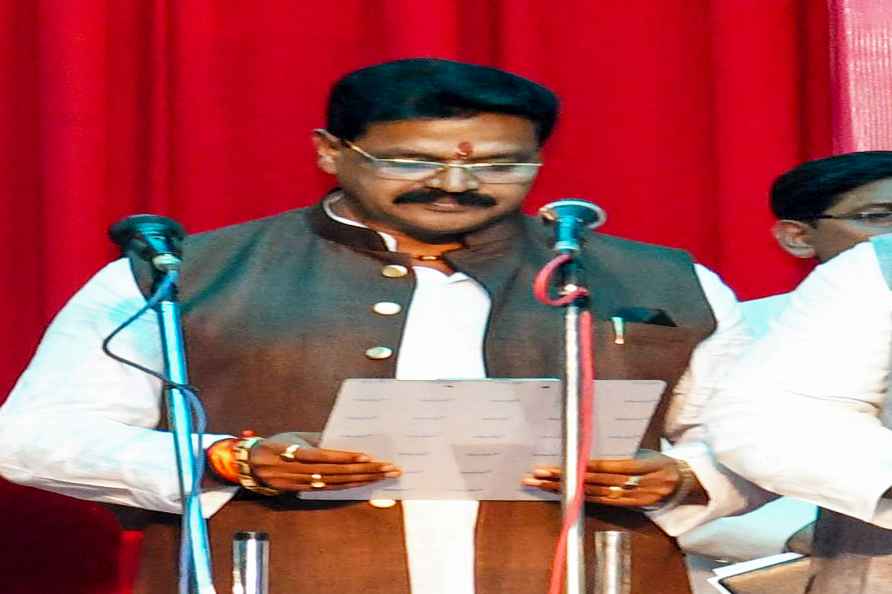 [Patna: In this photo dated Aug. 16, 2022, Rashtriya Janata Dal (RJD) leader Kartikeya Singh takes oath as Bihar Law Minister, in Patna. According to sources in the BJP, Singh was supposed to surrender in Danapur court on August 16, in connection with a kidnapping case. ( /PTI] Patna, Aug 17 : A day after becoming the law minister in the new Nitish Kumar government in Bihar, Kartikeya Singh alias Kartik Master appears to be in trouble after he avoided surrendering in a court or police in a kidnapping case, an official said on Wednesday. Kartik Master, who is close to Rashtriya Janata Dal's Bahubali leader Anant Singh, is facing the charge of kidnapping in Patna district. A case in this regard was registered at the Bihta police station in 2014 (Case number (835/14). The warrant was issued in first week of August and he had to surrender before the court or police till August 16, the day he took the oath as a cabinet minister in the Nitish Kumar government and was given the law ministry portfolio. As per the charge levelled against him, he was involved in the kidnapping of a person, named Rajiv Ranjan in 2014 and an FIR was registered against him at the Bihta police station. The victim had given a statement under CrPC of 164 in the court where he had mentioned the name of Kartik Master. Besides this case, Kartik Master is also facing other criminal charges in Mokama railway police station and other police stations of Patna and adjoining districts. Reacting to it, Kartik master said: "The allegations levelled against me are politically influenced and not proved yet. We will take action as per the law." Kartik Master is a political strategist of RJD Bahubali leader Anant Singh. He has been associated with Anant Singh since early 2000 and played a crucial role in the 2005 Assembly election for Anant Singh. He is a teacher by profession and recently was elected as MLC on the ticket of RJD. Reacting to it, Nikhil Anand, national general secretary of the OBC wing of BJP said: "The council of ministers of Nitish Kumar government is presenting a very horrible picture. These people cannot ensure the safety and security of the people of Bihar. How come a person hides the fact that he is wanted in a kidnapping case and takes oath as a law minister of Bihar. It is very shameful for Nitish Kumar to have succumbed to the pressure of RJD." /IANS

Lagos, Sep 18 : A four-story building under construction in Nigeria's southern state of Akwa Ibom collapsed, leaving an unknown number of people trapped, a local official said. Located in the Pl […]

Manila, Sep 18 : Philippine President Ferdinand Romualdez Marcos left for New York on Sunday to participate in the 77th session of the United Nations (UN) General Assembly, with his priority focus on […]